EDF’s Bouchain combined cycle plant – the first commercial application of GE’s all-air-cooled 9HA gas turbine – achieved an efficiency of 62.22% (ISO conditions) during commissioning, a new world record, recognised as such by Guinness World Records. The previous best was 61.5%, set by the Siemens H class combined cycle plant at the Fortuna unit of Stadtwerke Düsseldorf’s Lausward power station (profiled in the May 2016 edition of Modern Power Systems). 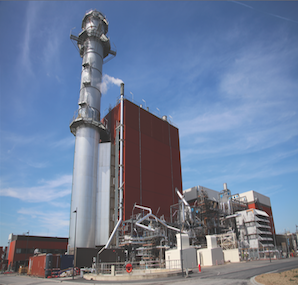 And the 62.22% combined cycle efficiency, remarkable as it is, is “a beginning not an ending for us”, said Joe Mastrangelo, GE Power’s president and CEO of gas power systems. “We’ve got technology programmes turbine that take us above 63%, with a march to 65% SSS by the beginning of the next decade.”

The 605 MW Bouchain plant, “co- developed and designed” by GE and EDF, was officially inaugurated on 17 June.

Like Siemens, GE also emphasises the flexibility of its HA based combined cycle plants, reported to be capable of reaching full power from “cold standstill” in less than 30 minutes. This will be important for Bouchain (as for other combined cycle units struggling to make money in current European power market conditions), which is expected to operate for only 2500-3500 hours per year, with more than 100 starts/stops.

In addition GE sees Bouchain as a leading example of its “digital power plant” concept, with hundreds of extra sensors installed, providing “significant data capture”, according to Paul McElhinney president & CEO, GE Power Services. When combined with “the digital capability which the company has been building up over the past couple of years ”this is expected to help avoid unplanned outage, optimise operation and substantially reduce lifecycle O&M costs.

The plant can provide rapid response in the event of grid frequency drops, eg, 94 MW in 10 seconds/147 MW in 30 seconds.