Bottom ash handling: why the outlook is dry

Clyde Bergemann believes that dry systems are the way forward for bottom ash handling at coal fired power plants. The first two commercial installations of its DRYCON system, in China, are due to enter operation shortly. 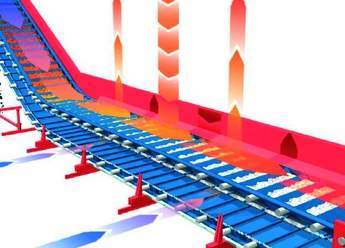 By far the majority of the world’s coal-fired power plants use wet extraction systems for handling bottom ash, either of the submerged scraper conveyor (SSC) or water impounded hopper type. But there is increasing interest in dry systems, both for new build and retrofit applications. Among the drivers are environmental issues, growing concerns about water scarcity and increasing awareness of the overall cost savings that dry systems can deliver.

For some years the dry bottom ash handling business has been dominated by Magaldi of Italy, which, apart from a couple of Chinese suppliers, has essentially had the field to itself.

However, Clyde Bergemann has now emerged as an important new player, with its DRYCON (DRY ash CONveyor) technology. This employs fresh air in counter-current flow to cool the ash, returning precious reheat energy to the boiler, with no need for water. It also aims to address some of the problems encountered with previous dry technologies, while at the same time increasing ash capacity and enhancing ash cooling.

The company sees dry systems taking over from wet bottom ash handling in the coming years, and according to Neil Ford, sales director of Clyde Bergemann Materials Handling, speaking in November at the company’s Clean Energy Technology Forum in Bradford, UK, “two to three enquiries per day” were being received about dry bottom ash handling.

The first two commercial DRYCON systems are currently being installed in China – where reduced water consumption is a priority for the power industry – at two 600 MWe coal fired units in Inner Mongolia. The two systems, which are being supplied to Dahai Power Generation Ltd, have been manufactured at Clyde Bergemann’s new purpose-designed Beijing facility.

According to Clyde Bergemann, the benefits of its DRYCON system include increased boiler efficiency and reliability, as well as income from the dry ash byproduct, the elimination of disposal area costs, and reduced environmental impact. The savings are estimated to be up to about 1.4 million euro/year for a typical coal plant.

Efficiency benefits arise from the reburning effect of the bottom ash during the extraction and air cooling, while the absence of water prevents corrosion and therefore increases boiler life.

Also, with a dry system of this type, the bottom ash from coal combustion can be put to good use, rather than needing to be disposed of, in, for example, landfill sites. Rather, the resultant ash can be used in applications such as structural embankments and drainage media or milled and mixed with fly ash and used in the cement industry.

The need for water treatment is also reduced, freeing up the space normally allocated to ash water treatment equipment, reducing maintenance requirements and eliminating the costs associated with ash water treatment. The latter can be considerable – around $10 million per year in the case of one Russian plant recently visited by Neil Ford, for example.

The DRYCON system is essentially a purpose designed plate conveyor system working with air rather than water cooling. The air travels in the opposite direction to the ash flow, along the surface of the ash. The remaining carbon in the ash continues to burn as it travels along the conveyor, reducing the unburned carbon level of the discharged ash and heating the air before it enters the combustion chamber, providing additional heat input to the boiler and therefore increasing overall efficiency. But NOx values are not affected, says Clyde Bergemann.

The cooling air volume is about 1% of total combustion air volume, with the air required drawn in by the negative pressure of the combustion chamber and regulated by throttle flaps on the air inlets. The ash temperature drops from about 600-860ºC to around 90-110ºC at the discharge end of the conveyor.

Key goals of the design approach adopted for DRYCON were reliability, robustness, maintainability and ease of retrofitting.

For reliability, a round link chain system combined with an automatic chain tensioner, providing positive drive at all times, was adopted instead of a steel belt drive, thus eliminating the problem of slippage when operating at high temperatures.

The use of a high strength chain system allows a longer conveyor to be used, achieving a longer cooling distance, eliminating the need for secondary or post cooling.

The conveyor consists of steel plates of closed apron design, with a small gap between the plates.

Robustness includes the ability to cope with the impacts of the very large lumps of ash that can occasionally arise. To deal with these lumps impact tables are placed below the conveyor in the ash inlet section. The conveyor only contacts the impact tables when large pieces of ash place an abnormally large load on it, thus minimising friction and wear during normal operation.

The conveyor is supported on long-life lubricated rollers, which can be readily accessed from the outside of the conveyor and easily replaced.

Heat transfer into the drive chain and support idlers is minimised, while any heat that is transferred is removed by air cooling.

Integrated into the conveyor is a recirculation system collecting fine ash particles that have fallen through the plates, eliminating the need for an additional fines conveyor and limiting the height of the equipment, which is particularly important in retrofit applications. Scrapers mounted on the conveyor scrape the fines against an automatically adjusted backplate, returning them to the top side of the conveyor.

Wear due to dust getting between moving parts is also minimised.

The DRYCON conveyor inside width is in the range 800-2400 mm, depending on ash hopper dimensions, while conveying velocity is 0.01 to 0.1 m/s.

Air flows in the DRYCON system DRYCON ash temperatures and cooling air volumes. Total cooling air is about 1% of combustion air The problem: large lumps
can arise in the
ash from time to time… DRYCON monitoring systems The chain key is designed to be very reliable in operation but assembly only requires a hammer