The capacity of the Vianden pumped storage plant in Luxembourg has been increased. A newly developed raise boring rig was used to build a vertical pressure shaft at the project. 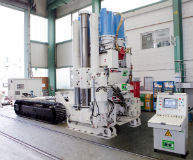 Vianden pumped storage plant in Luxembourg was put into operation in 1963-4 with nine sets of machines. In the mid-1970s it was extended to include a tenth machine unit which increased capacity to 1100MW. The operator, Société Électrique de l’Our (SEO) is now uprating the plant again by 200MW through the installation of an eleventh unit. This uses the existing upper and lower basins but has its own system of waterways and inlet and outlet structures.

The construction of the facilities to accommodate the new machine was made the responsibility of the consortium PSW Vianden Los 1 (consisting of the companies Züblin, Strabag and Jäger). The contract included, among others, the construction of an inlet and outlet tower in the upper reservoir, followed by a vertical pressure shaft.

Construction of the pressure shaft

The contract for the construction of the pressure shaft was awarded to Edilmac dei F.lli Maccabelli S.r.l. by the Vianden consortium. The pressure shaft extends to over 300m from the upper reservoir down to the power house level. After passing through a vertical bend, a 240m long shallow inclined pressure tunnel connects to the power house. The vertical shaft, manifold and pressure tunnels are equipped with a steel armour, which is designed to accommodate the full potential outside water pressure. The pressure shaft and tunnel will have an internal diameter of 4.5m.

The project area is located in the clayey to silty fine sand of the Siegen and Ems steeps of the Lower Devonian, where there are generally very low to impermeable ground water conditions. As stated in the tender documents, the raise boring method was considered to be the best option for construction of the vertical pressure shaft.

After the contract was awarded in April 2010, Herrenknecht developed the raise boring rig 550 VF. Here, customer-specific requirements were incorporated. The successful factory acceptance test took place on 5 October 2010. As it was a compact, modular design, the rig could be delivered from the factory in Schwanau to the Vianden site with relative ease where it arrived on 8 October 2010.

When using a raise boring rig for shaft construction in stable rock the handling of the rig, over the shaft starting point, takes place first of all by means of a crawler track or crane. From here the vertical pilot hole starts with the drill bit facing downwards. If necessary, the pilot hole can be carried out at an angle of up to 45°. The debris is flushed out during the pilot hole by a flushing medium (such as water or air). Depending on the drilling depth, additional drill rods are successively installed until the target depth is reached in the existing lower tunnel or cavern. The pilot hole drill bit is then removed and the reaming head (typically 1-7m in diameter) is mounted on the drill string. The rig pulls up the reaming head with the drill string. Through the rotation of the reaming head, the rock is crushed and falls down where it is removed. The shaft is reamed from the bottom to the top by the diameter of the reaming head to the target dimension.

Compared with conventional shaft sinking methods, the use of a raise boring method significantly increases the safety of personnel, since they work outside the actual shaft. In addition, significantly higher construction rates can be achieved. The shaft wall is generally smoother with a simultaneously reduced over-excavation. Dropping of the muck on a lower level is associated with less effort. Since fewer staff is needed to operate the rig significant cost savings can be achieved here.

Execution of the drilling in Vianden

During on-site assembly at Vianden, the construction team had to mount the raise boring rig 550 VF in a 45m high inlet/outlet tower in a significantly confined space. Nevertheless, the on-site assembly was completed in three days. On 16 November 2010, the rig was put into operation as planned and the pilot hole (diameter of 381mm) was drilled. In the course of the reaming (5460mm diameter), 10m/day was achieved on average (with a maximum of 18m/day).

With the constantly changing geological conditions of loose to hard rock with maximum compressive strengths of up to 130MPa, the machine control system proved to be particularly favourable, ensuring a failure-free boring process. The time schedule for assembly, pilot boring, reaming and disassembly was met after 40 drilling days. On 18 January 2011 the drilling of the 282m long shaft was completed. Commissioning of the eleventh unit is scheduled for the third quarter of 2013.

Characteristics of the 550VF

The RBR 550 VF by Herrenknecht is one of the largest rigs of its kind ever used. It is distinguished by a compact, modular design and has a powerful and highly efficient centre-free drive. Herrenknecht’s proven variable frequency controlled drive concept allows for variable speed and torque control. The rig is designed for shaft lengths of up to 1000m and the mechanised drill pipe handling ensures more efficient operations as well as greater safety of personnel during installation and removal of drilling rods.

The mechanical excavation of shafts using the raise boring method is ideal for a variety of applications such as ventilation shafts, ore and waste passes, hoisting shafts, supply shafts (energy, water and air) and pressure shafts for hydroelectric power plants, as in the case described above.