Nancy Allen of the US Army Corps of Engineers reviews the recent historic breaching of Embrey dam, which has allowed the Rappahannock river in Virginia to flow freely for the first time in over a century 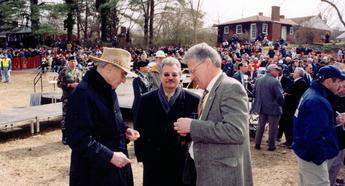 On 23 February 2004, thousands of citizens gathered along the banks of the Rappahannock river in Fredericksburg, Virginia, US for an historic event. Within a few hours, a portion of Embrey dam, which had stood for almost 100 years, would be blasted by over 270kg of explosives.

Virginia senator John Warner, a longtime supporter of the dam’s removal and the man responsible for securing the project funding, spoke at a ceremony prior to the breaching.

‘As a result of today’s event, fish will be able to swim unhindered from the Chesapeake to the Blue Ridge, and generations that follow us will be better able to enjoy all that the Rappahannock has to offer,’ he said.

‘This event strengthens our relationships with our federal and state partners and other military organisations,’ commented assistant secretary of the Army for Civil Works John Paul Woodley, who oversees the US Army Corps of Engineers (USACE), the lead agency on the project.

Later, they moved to the edge of the stage with Fredericksburg mayor Bill Beck, ready to give the ‘go order’ to the Army and Air Force Reserve troops that stood waiting to light the charges.

More than just a feat of engineering, the moment was symbolic of the unprecedented level of cooperation shown by all the agencies as they worked for more than 10 years toward the single goal of removing Embrey dam from the Rappahannock river.

The Rappahannock flows for around 300km from a spring in the Blue Ridge mountains to the waters of the Chesapeake bay. Fredericksburg, a historic Virginia town founded in 1728, sits at the fall line of the Rappahannock.

A wooden crib dam was built on the falls in 1853 and in 1910, the Fredericksburg Water Power Company finished construction on a 234m-long, 6.7m-high concrete dam that spanned the river. Embrey was an Ambursen-type dam, consisting of a series of reinforced concrete buttresses (4.2m on centre) with 38°-sloped concrete slabs on the upriver side.

Virginia Electric and Power Company acquired the dam in 1926, operating it until the early 1960s. The city then used water diverted by the dam into the Rappahannock canal as a raw water source for its water supply.

In 1985, a group of Fredericksburg business owners, politicians and community members formed Friends of the Rappahannock (FOR). One of their primary concerns regarding the health of the river was the decline of migratory fish stocks such as American shad, hickory shad, blueback herring and striped bass that were once so plentiful in the Chesapeake bay watershed. These anadromous species spend most of their lives at sea and only enter freshwater rivers such as the Rappahannock to spawn.

Together with the Virginia Department of Game & Inland Fisheries, FOR began to raise awareness of the migratory fish passage problem. Fish elevators and other solutions were not feasible at Embrey and the groups advocated complete removal of the dam.

There were other factors supporting the removal project. The dam had fallen into disrepair and would cost the city millions of dollars to rehabilitate it. The citizens of Fredericksburg had often been found playing around the dam, causing a safety concern for the city. In addition, canoeists and kayakers travelling on the river had been forced to portage around the dam.

By the mid-1990s, the city of Fredericksburg was working with neighbouring Spotsylvania county to develop new regional water supply solutions. These discussions made it clear that the water plant connected to the Embrey dam could be closed and the last major ‘need’ for the dam was gone.

One of the major obstacles to removing the dam was the cost. As early as 1992, city officials met with the USACE to discuss the feasibility of removing the dam at federal cost. While USACE is better known for building civil works projects, there was a possibility that dam removal would also fall under its purview.

The push to remove Embrey dam got a major boost in May 1996 when FOR invited senator John Warner for a round table discussion about the project. Warner pledged that if the group could demonstrate that there was community consensus to take down the dam, he would take it on as a personal project.

Warner arranged for US$100,000 in funding for the USACE to conduct a reconnaissance study. During the study process, engineers, biologists, oceanographers, planners, economists, archaeologists, social scientists and other subject matter experts from the Corps’ Norfolk District collected and analysed a vast quantity of data.

In the end, the study had to weigh the project benefits against any potential adverse project impacts and ultimately determine if any aspect of Embrey dam’s removal would result in significant, long-term adverse impacts on environmental resources.

In 1998, the USACE concluded that fish passage and the restoration of the Rappahannock river was in the public interest, making the project eligible for federal funding. The preferred alternative called for building a sediment containment area, dredging behind the structure and completely removing Embrey dam.

It would restore more than 160km of main stem fish spawning and rearing habitat; open up the longest flowing river in the Chesapeake bay drainage; enhance the Rappahannock for anglers and recreational users; and save the city of Fredericksburg millions of dollars. A year later, the Water Resources Development Act authorised US$10M for the project.

‘The biggest challenge was simply the scope of the project and relaying the complexity of the project to the public,’ said Michele Cleland, an oceanographer with the USACE’s Norfolk District. ‘Everything had to work out just right for the project to go within the required time frame. We couldn’t just remove a dam in the blink of an eye.’

In March 2003, after the necessary permits had been obtained, the Norfolk District hired a contractor to oversee the removal of over 191,000m3 of sediment. This was to minimise any possible impact from increased sediment levels downstream during the breach.

The project plan called for a section of the dam to be breached using explosives in February 2004. Timing was critical, as the work had to be done in time for fish to take advantage of the newly reopened fish passage during the spring migration season.

USACE began working with the US Army Dive Company and the US Air Force 555th Red Horse Reserve Squadron on the demolition under the Department of Defense’s Innovative Readiness Training (IRT) programme, which was developed to find ways to use the military’s unique resources and capabilities to serve American communities in need while providing realistic military training benefits.

The team developed a plan to blast about ten of the buttresses, or approximately 40m of the dam. Divers drilled hundreds of holes into which around 300kg of explosives would be placed. They dubbed the operation ‘Noah Shiva’ after the biblical figure who survived the great flood and the Hindu god for destruction and rebirth.

Captain Clayton Lull, commander of the US Army Dive Company said: ‘this provides us with not only a great training opportunity but also gives us the chance to make a positive impact on the environment for the city of Fredericksburg and the Commonwealth of Virginia.’

Fredericksburg embarked on an ambitious public information campaign, including the use of fact sheets and public meetings to keep citizens updated about the ceremony and the breaching. Because there were residences in the vicinity of the dam, they had to pay special consideration to those homeowners by communicating the effects of the explosion, including sound and potential for structural damage.

Other information that had to be released included the location and schedule for the event, a secured area surrounding the dam, the closing of the air space prior to and during the breaching and a traffic stop on a major interstate highway that crossed a bridge over the river not far upstream. Another important point was that although the breaching would allow fish to pass through the dam and the pool of water behind the dam to drain, canoeists and kayakers would have to wait until the removal was complete to traverse that part of the river.

‘We wanted as many people as possible to participate in this event, but public safety remained our primary concern,’ said Doug Fawcett, director of public works for the city of Fredericksburg. ‘The level of anticipation and excitement this event generated in the community was unprecedented. Nearly everyone wanted to participate in the historical event and the interest transcended the Fredericksburg area.’

Local citizens and members of the media began converging on the outdoor location early on the morning of the ceremony. By the time it began, more than 100 media representatives and some 3000 citizens were present.

‘The Corps [USACE] is well known as a builder of dams,’ commented secretary Woodley on the unique nature of the event. ‘But the removal of Embrey dam not only spotlights our increasingly important environmental restoration mission but gives the ‘citizen soldiers’ of the Corps a chance to support its military customers by providing a real world training exercise to the men and women of our armed forces.’

The ceremony also celebrated the achievements of local citizens who had worked for so long to make the day a reality.

Although only 10% of the charges ignited the first time, a second blast saw the Rappahannock flowing freely for the first time since 1853. The river rose quickly but as USACE’s hydrological models had predicted, no downstream flooding occurred and the river dropped back to its normal levels shortly.

The remaining sections of Embrey dam will be removed by mechanical means beginning this summer. The project is scheduled for completion by February 2006.

’This project has been not only the most challenging of my career but the most unique because of all the different partners it brought together, including not only city, state and federal agencies but military and environmental representatives at every level,’ said Brian Rheinhart, who served as the project manager for the dam’s removal.

Embrey will be the largest dam removed in the US since 1999, when the Edwards dam was removed from the Kennebec river in Maine.