Training workshops and government incentives have formed the basis of successful small hydro development in China. Now the country is working to disseminate small hydro technology on a global basis, explains D Pan 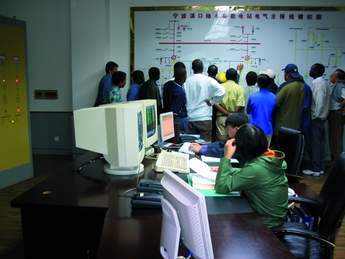 Chinese small hydro power has acquired unusual environmental credentials. In particular, over the past five years small hydro has had a key role in a campaign to protect the country’s forest habitat.

In 2003, a government project was launched to replace traditional firewood used for domestic cooking and heating with electricity supplied by small hydro projects. Estimates suggest that over a six-month period 400,000t of firewood can be saved and replaced by 700MWh per year of renewable energy. The project is to cover 28M rural households by 2015 and will save 140M tonnes of firewood on an annual basis.

However, city dwellers can hardly afford to use electric cookers, let alone farmers in the poorer rural areas. Officials acknowledge, therefore, that the price of electricity is the key to the successful implementation of this project. Favourable prices and subsidies are being provided.

The use of such government incentives seems to be one of the reasons behind the successful development of small hydro power resources in China. Various policies have been stipulated by governments since the 1950s. One policy in particular has helped to aid the development of small hydro projects throughout the whole country. The ‘three selves’ policy relates to self-construction, self-management and self-consumption. It implies that whoever (either local government or local collectives) invests in and builds a small hydro station should have the right of management and electricity consumption, instead of handing it over to the state-owned electric authorities.

• Keeping profit from existing plants instead of handing it over to the government for further expansion of the electricity sector.

• Introducing 6% value-added tax for small hydro (versus 17% for large hydro and others).

• Converting debts into shares if necessary for plants running into difficulty with paying back loans.

Internationally, the classification of small hydro projects typically ranges from 10MW-20MW but in China the scale encompasses projects up to 50MW. By the end of 2006, there were over 43,000 rural small hydro stations in operation in China with 47GW of total installed capacity. In 2007, a further 6GW was commissioned and at present over 20GW is under construction. Almost 25% (170GW) of the country’s theoretical hydro power potential is accounted for by small hydro.

In China, over a quarter of the population is supplied by small hydro but such figures are not replicated across the globe. In numerous developing countries a large proportion of small hydro potential is yet to be harnessed. For example, in Africa there is huge potential but less than 20% of possible resources have been exploited and the majority of the population there has no access to electricity.

Only 4% of the population has access to electricity in Rwanda, and the comparable figures for neighbouring countries include 7% in the Democratic Republic of Congo, 8% in Kenya and 13% in Ethiopia. Furthermore, in other countries a large number of small hydro stations have been built but many are not operational or are operating inefficiently. The majority in Malaysia – 35 out of 42 stations – need to be refurbished.

One of the big obstacles to the development of small hydro potential in these areas is a lack of appropriate technology and knowledge. Hangzhou Regional Center (Asia-Pacific) for Small Hydropower (HRCSHP ) was set up in China in 1981, and drew upon the country’s extensive experience gained from small hydro development. Co-sponsored by the UN and China’s Government, the objectives of HRCSHP have been to offer and promote international cooperation for small hydro development by means of research and development, information dissemination and consultancy for the Asia-Pacific region. Since its establishment, HRCSHP has hosted 49 training workshops for 900 participants from over 100 countries. It is still working to disseminate small hydro technology globally.

In 2007, 124 participants from Asia, Africa, Latin America, Oceania and East Europe attended various small hydro power training workshops run by HRCSHP. The programme for 2008 includes further workshops both this month and, to address Africa’s needs, from mid August to late September, and the event will be given in French. Fellowships are offered, including international airfares, boarding, lodging, etc.