Bearing up under tight deadlines

During refurbishment work at the UHE Salto Osorio hydroelectric plant, custom-made bearings were delivered to extremely tight deadlines to minimize downtime at the Brazilian project 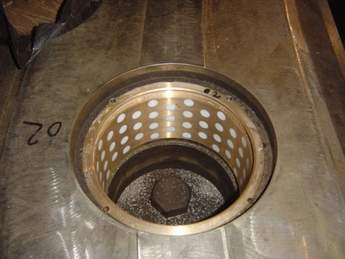 UHE Salto Osório is located on the Iguaçu River at Quedas do Iguaçu City in the Brazilian state of Paraná, 837km southwest of Sao Paulo. The 1078MW plant has been operating its six Francis turbines (four Mitsubishi and two Hitachi units) since 1975. The power station is controlled by Tractebel Energia, a unit of Suez Energy International based in Florianópolis in the state of Santa Catarina.

In 2005, Tractebel decided to refurbish the turbines and its components and contracted GE Hydro, now part of the Andritz Group, to do the work. Tractebel and GE Hydro decided to replace the bearings of all positions: upper, middle and lower wicket gates; linkages; servomotors; and operating ring segments.

GE Hydro knew the main cause of bearing failure is corrosion and dirt, which can invade machinery during servicing. Since the original bearings were composed of a self-lubricating material that required minimal maintenance, GE Hydro turned to GGB, formerly Glacier Garlock Bearings, for the replacement bearings.

“The original bearings were self-lubricating and Tractebel indicated the material had worked very well for 30 years,” explains Rafael Ingegneri, sales manager for GGB Brazil. “In this case, a special service was offered to GE Hydro: GGB would supply DB custom parts for each position.”

GE Hydro disassembled the turbines, measured the housings and shafts and forwarded the measurements to GGB. GGB then calculated the assembly tolerances for each position (clearance, interference fit, design, etc.), produced the parts and supervised the assembly of the bearings at the hydro power station.

Since GGB produced custom parts for each position, Tractebel and GE did not have to invest significant funds in housing and shaft refurbishment.

A matter of time

Timing was a major challenge on the project. “When they open a machine like that, they cannot stop it for long, as just one day of downtime translates into a big loss,” Ingegneri explains. “We had just 10 days to calculate the tolerances of each bearing, get GE’s approval and produce and deliver the parts. To accommodate this tight schedule, we had to buy the raw materials in advance and pre-machine the parts.”

Tolerances were yet another challenge. Because of wear on the shafts, the tolerances were larger than on the original design. Each turbine has approximately 20 wicket gates and each gate has three bearing positions. After measuring each shaft and housing, GGB had to design a bearing for each position and give it an individual identification number. The average tolerance was 50 microns.

GGB also sent its mechanical engineers to the facility to supervise the assembly, cooling and contracting the bearings to make them easier to install. “Each bearing was assembled and the inside diameters checked afterwards. Tractebel confirmed the actual values were in accordance with our technical calculations,” says Heitor Sarro, engineering supervisor for GGB Brazil.

In all, GGB supplied more than 200 bearings for the wicket gates, plus washers that regulate the rings and pads for special machinery.

“The parts are working very well, and Tractebel and GE Hydro were very satisfied with the whole package supplied by GGB,” Ingegneri says, adding that the bearings will work for at least another 30 years.