Bearing up in China

Almost half of the turbines to be used at China’s Three Gorges hydro power project are being supplied by Alstom Power. The turbine runners – which are 23% larger than any others produced by Alstom previously – are 10.6m in diameter, with a height of 5m. 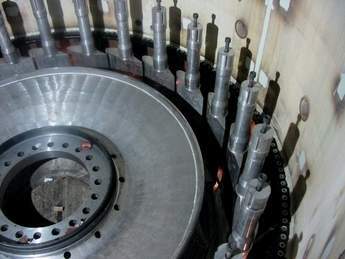 For hydro turbines on the right bank of the dam, Busak+Shamban, the sales and marketing arm of Trelleborg Sealing Solutions, is supplying Orkot bearings of an advanced reinforced polymer material. The bearings are fitted on wicket gate housings within the alstom hydro turbines. These are adjusted to control water flow and bearings aid their movement.

Bronze bearings have been a traditional solution in hydro power turbines but to give them sufficient friction to work they require lubrication. During operation, the lubricant enters the water, which can have a detrimental effect on wildlife. Environmental pressure means that greaseless ‘fish friendly’ bearings must now be fitted on hydro turbines.

As an alternative to proven products Busak+Shamban offered Alstom Orkot advanced polymer bearing technology. To demonstrate the projects efficiency, a number of independent tests, specific to bearings in hydro power applications, were carried out. The Orkot performance was measured against bronze bearings and competitive composite solutions.

In the study, conducted by the Swedish University Technology Division, four commercially available bearing materials were tested in water-lubricated conditions with an oscillating stainless steel shaft that had a motion pattern similar to a bearing supporting a turbine blade. Results were compared to a lubricated tin-bronze bearing under the same test conditions.

The shaft motion pattern was a cycle consisting of a 60 degree motion back and forth with a two second pause before and after each direction change. After that, 10 smaller plus or minus 12 degree motions were performed with a one second pause between each sliding direction change. This was repeated about 15,000 times or until the test was stopped. In total, there were about 330,000 motions with a maximum sliding speed of 5.6mm per second. Friction values were monitored 0.3 seconds after every sliding direction change.

The best performing material, which recorded a friction value of zero at start up, deteriorated quite quickly after the run in layer wore away. Showing increasing friction throughout the test, this averaged out at above m0.2. The other materials tested all showed start up friction of between m0.07 and m0.2. However, all demonstrated increasing friction values during the test cycles well above m0.1. Conversely, the Orkot material was slightly above m0.1 at start up but after running in over a limited number of cycles its friction values were almost constant at a friction force below m0.1.

The Orkot products exceptional friction characteristics, demonstrated during the tests, mean they have a very low co-efficient of friction in dynamic situations and especially at start of movement after extended periods of rest. This was important in the Three Gorges turbines where, once the optimum flow of water has been established, the bearings within the runners would be quasi-static for a considerable period of time, perhaps several hours.

The Orkot TXMM and TLMM materials used in these bearings are specific to Trelleborg Sealing Solution. A polymer material, the elasticity of the Orkot product is also significant in the functioning of the bearings. As opposed to a metal bearing, the Orkot material is relatively soft. When a load is applied to the material, it gives very slightly, deflecting or deforming in shape. This material property improves the life of the bearing by reducing wear. It has the further benefit of accommodating misalignment within equipment housings.