Baffling the Burn of Mosset

A baffled crump weir flow control structure was used for the first time at a UK dam at the Burn of Mosset flood alleviation scheme. The Scottish project has been operating successfully under flood conditions and is enhancing the ecological status of the watercourse 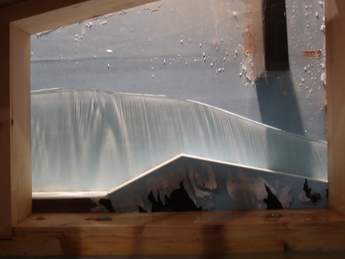 Events over recent years have demonstrated that the UK appears to be increasingly affected by significant flood events. According to the Environment Agency and the Scottish Government, over 5M people in Great Britain live and work in properties that are at risk of flooding from rivers or the sea.

Forres, a town with approximately 9000 inhabitants, is located some 48km east of Inverness in northern Scotland. The Burn of Mosset drains an area of 49km2 to the south of Forres before flowing through the centre of the town towards Findhorn Bay and the Moray Firth.

Most recently Forres suffered severe flooding in 1997, with smaller events in 2000 and 2002. The 1997 and 2000 events were estimated to have return periods of 1 in 50 and 1 in 5 years respectively. Prior to the flood alleviation scheme, nearly 20% of houses in Forres were at flood risk from the Burn of Mosset at the 1 in 100 year return period. Without investment in flood alleviation the flood damages in Forres would exceed £43M (US$70M) over the next 50 years.

Moray flood alleviation was established in 2001 for the purpose of delivering flood alleviation to a number of communities in Moray, including Forres. It is an integrated team comprising The Moray Council, Royal Haskoning, Morrison Construction and EC Harris. The construction engineer under the Reservoirs Act for this scheme was Ian Gowans.

The Forres (Burn of Mosset) flood alleviation scheme comprises a flood storage reservoir, situated on the Burn of Mosset at Chapelton, which lies some 1.5km south of the town, combined with some minor flood defences within the town of Forres and two small earthfill dams on the periphery of the reservoir/storage area to avoid flooding of other properties. It is estimated to provide a standard of protection of at least 1 in 100 years, including an allowance for climate change up to 2080.

Work commenced on the scheme in 2002, with construction taking place between November 2007 and November 2009.The flood storage reservoir comprises:

• Earthfill embankment dam with a maximum height of 6.9m and a crest length of about 200m.

• A 160m wide spillway, the upper part surfaced with open stone asphalt and a permeable concrete slab construction at the toe of the spillway.

• A stilling basin, with the surface protected by two layers of rock armour.

• A flow control structure incorporating a baffled crump weir, which discharges up to 8.5m3/sec together with two penstock controlled fixed orifices, for maintenance purposes (both closed under normal operating conditions).

Flows in excess of the capacity of the baffled crump weir are stored in the reservoir until the inflow rate reduces and the retained water level reduces. The spillway will allow the more extreme floods to be safely discharged when the reservoir is full. The spillway is designed to pass the extreme flood events required for this category A reservoir (PMF summer inflow = 313m3/sec, 1 in 10,000 inflow = 163m3/sec) without damage.

The scheme was required to operate without user intervention, without power and allow passage of migratory fish. A range of discharge control mechanisms were reviewed during design, including a simple orifice, a flume, and other control systems. However, to achieve a discharge of no more than 8.5m3/sec, and to avoid flooding downstream over the range of heads, it was decided to develop a baffled crump weir (BCW) device. This would be along the lines of that described in a paper at the 13th British Dams Society Biennial Conference in 2004, by Ackers et al [1].

The model tests also allowed the observation and measurement of flow conditions in the culvert downstream of the control structure itself and to assess the need for energy dissipation/tail water control measures. The performance of the bypass sluices, which may be used if the control structure were to block, or be shut off for maintenance purposes, was also tested. These are controlled penstocks which remain closed under normal operating conditions. Should a blockage occur to the BCW during a flood event, then one or other of the bypass controls may be operated.

Measurements and observations relating to the performance of the crump weir for assessing the ability of migratory fish to pass over the weir were also made.

The optimised baffle arrangement, in the 1m wide channel, was identified from the tests by achieving an acceptable stage/discharge relationship. It consists of two vertical baffles, the downstream baffle having an angled lip on its lower edge to ensure clean separation of the flow from the structure. This is the first baffled crump weir flow control structure constructed in a UK dam.

The spillway has a long curved crest that fits in well with the local topography of the valley. This allows the PMF to discharge over the dam whilst minimising the flood surcharge. During such events, water velocities on the spillway will reach up to about 7m/sec for a period of up to 30 hrs.

It was deemed highly desirable to maintain the ‘green’ appearance of the dam to blend in with the surrounding landscape. Therefore, the design of the spillway and stilling basin combines hard engineering beneath an aesthetically pleasing grass covering.

A number of options to reinforce the face of the spillway and stilling basin were considered. Open stone asphalt was considered the best option for the upper slope of the spillway because it is relatively flexible, accommodating minor settlement of the earth fill and can easily be vegetated.

The factor of safety against sliding between the earth fill and the spillway construction materials was critical. The most important factors being: the slope angle, the flow depth/velocity and the angle of internal friction. In the final design the earth fill surface was benched and covered with a needle punch geotextile. A 600mm layer of coarse gravel was placed on the benched profile, covered with a 400mm layer of open stone asphalt and topsoil [3].

A robust solution was required for the lower slope of the spillway because of the higher water velocities and turbulence associated with the hydraulic jump. A system involving a permeable concrete solution, with a ‘voided’ concrete slab on the surface was developed for this area. This was constructed first along the toe and up the lower part of the spillway slope. Then two layers of rock armour, infilled with sand and gravel together with top soiling, was utilised to armour the remainder of the horizontal and sloping areas around the periphery of the stilling basin.

Open stone asphalt was utilised on the upper spillway slope. This is the first large-scale use of open stone asphalt on a UK dam spillway. Open stone asphalt is an inert material that does not deleteriously affect water quality. It is also a permeable material with approximately 20% voids spread throughout the material. The irregular surface of the open stone asphalt substrate allows the topsoil spread to interact with it, thus reducing its susceptibility to creep down the slope. The 150mm soil cover also helps reduce the rate of degradation of the hydrocarbon elements of the material by ultra-violet light.

The top soil covering the spillway and stilling basin will probably be lost during any major overtopping event. But, given the infrequency of such events, the grass will probably be able to grow undisturbed for many years.

The Burn management works are located upstream of the dam but within the flood storage area. The main for this has been to create an extensive natural sediment accretion zone with a large capacity to store sands and gravels and retain large woody debris that will require minimal ongoing management and little or no maintenance. This thereby reduces the risk of sediment blockage of the dam control structure or damage from large woody debris, whilst working towards the objectives of the Water Framework Directive and enhancing the ecological status of the watercourse.

The main body of the flood storage area comprises a wide flat area of peat bog. The burn channel was confined on both sides through this area by man-made embankments, which have been generated over decades by dredging of the channel by the riparian owners, to improve flow. This was necessitated by ongoing deposition of river borne coarse sediments. Over virtually all of this length, the bed of the burn was perched above the level of the surrounding floodplain.

The burn management works included channel realignment to restore more natural branched channels, wet woodland and bog which are valuable habitats. To ensure that there was no interruption in passage for migratory fish, a shallow ‘secondary’ channel was excavated on a sinuous alignment, between the two deliberate breaches in the left bank of the burn. Under low flow conditions, this initially permanently diverted about 20% of the flow in the burn into the new channel across the adjacent floodplain. Areas adjacent to the new channel were planted with native trees of local provenance, whilst the lowest lying areas, that remained permanently wet, were left open.

The Burn management works are an example of ecologically beneficial long-term river restoration undertaken as an integral part of a flood alleviation scheme.

The works will take a few years to fully develop and naturalise, but already there is a noticeable increase in the amount of wildlife, particularly wildfowl, and a major local geomorphological change. Following a site visit shortly after the burn had been realigned, a representative from Scottish Natural Heritage said ‘I was really impressed to see this area of work and just how well the water is spreading out across the area. The area provides a really good example of…measures that can be taken to try and reconnect our rivers with their floodplain.’ [4]

The Scheme was officially opened on 28 August 2009. One week later 93mm of precipitation was recorded over a thirty-hour period in the Burn of Mosset’s catchment. Despite a few key elements of the scheme being not quite complete, the scheme successfully operated and prevented flooding of hundreds of properties.

The community was obviously delighted to see the scheme avert what would otherwise have been a significant flood. Positive feedback has also been received from members of the local community regarding the overall appearance of the project, which demonstrates the successful integration of hard engineering with green landscaping.

During that event, a flow of 29m3/sec was measured at Wardend Bridge, some 2km upstream of the dam site. Encouragingly, a significant fan of sand and gravel was deposited onto the local flood plain. It is beginning to operate as intended.

The authors would like to thank: The Moray Council for permission to publish this paper; HR Wallingford for baffled crump weir physical modelling; and Hesselberg Hydro for open stone asphalt advice and construction