Hans Rönnqvist continues his assessment of the potential for internal erosion in embankment dams in Sweden, mostly, and investigating methods for identifying structures with a high potential for erosion 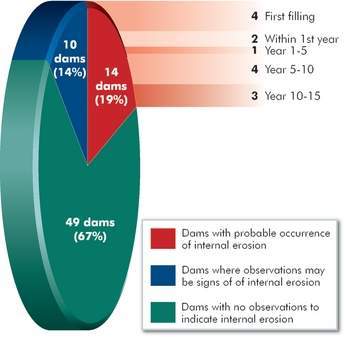 Review of part I of paper

An examination of the potential for internal erosion of dams due to the influence of filter coarseness (D15), and the internal stability of the filter and core material was presented by Rönnqvist (2007)[15] in the Nov. 2007 issue of IWP&DC, and is Part I of this paper. From this, a method was proposed for assessing the potential for surfacing internal erosion in embankment dams with moraine cores.

The moraine core material, also known as till, is of glacial origin and therefore having a wide and broad gradation. During the 1950s to the 1970s when the majority of moraine core dams were constructed there were some uncertainties in the filter guidelines in terms of grading compatibility to broadly graded base materials. This, and a period of over-reliance of the self-filtering ability of the moraine material in itself, has contributed to many moraine core dams having been designed with too coarse filters to satisfy today’s filter criteria.

It is important to point out, however, that glacial moraines have been used successfully as dam core (base) material in the majority of cases, but Part I of this paper investigates how moraine core dams with high potential for internal erosion are to be singled out from other well-functioning moraine core dams.

The proposed method in Part I is based on an examination of a number of existing embankment dams with moraine cores by investigating the influence of i) the filter coarseness in terms of filter D15, and ii) the internal stability of the filter and core material.

In this continuation paper the above factors are developed further and additional aspects, such as filter segregation and devoid of sufficient transition layers, are examined with aim to find indicators of internal erosion prone moraine core dams.

Foster et al. (2000)[2] found by statistical analysis that the great majority of cases of piping accidents in central core earth and rockfill dams involve dams with broadly graded core materials of glacial origin where pining occurs into coarse segregated filters. Following a series of serious piping accidents in embankment dams in the 1960s and 1970s, Sherard (1979)[17] noticed the similarities between the dam types that had been afflicted. In general sinkholes had appeared due to piping in thin core rockfill dams with core materials of broadly graded glacial materials.

An embankment dam afflicted by internal erosion can at a late stage exhibit clear signs of internal erosion; sinkholes at the dam crest or the upstream face, dirty water (turbidity) and unexpected increases in seepage. The process of internal erosion is usually described by the initiation, continuation and progression phases as defined in Foster & Fell (2001)[1].

The data set in this study consists of 73 glacial moraine core embankment dams (earthfill dams makes up 52%), see Fig. 1. Fourteen dams have confirmed internal erosion (rockfill dams are in a slight majority with 64%). All of the dams’ impervious cores are of glacial origin (moraines/tills) and classified as Sherard & Dunnigan (1989)[20] soil group 2 base soils (40-85% finer than No. 200 sieve (0.075mm) determined from base soils re-graded on the 4.75mm sieve).

The dam data in this study has been compiled by the author as part of an ongoing review of Swedish moraine core dams. Data from previous inventories by Nilsson (1995)[10] and Nilsson et al. (1999)[11] also encompassing Swedish dams has also been used in this study where applicable. The data set predominately comprises Swedish dams, except for three dams; two Norwegian glacial moraine core dams with rockfill shoulders that experienced internal erosion (dam data from Vestad (1976)[22] and from Sherard(1973)[16]) and a Pennsylvanian dam (US) with materials of glacial origin that suffered extensive sinkhole development at first filling of the reservoir (dam data from Talbot (1991)[21]).

As can be interpreted from Fig. 1 the majority of the “1-dams” experienced signs of internal erosion as long as 5-15 years after the dam’s commissioning. There were similar findings in Norway where internal erosion has surfaced not only during initial filling of the reservoir, but also several years after (Höeg (2001)[3]). This is somewhat contrary to the findings of Sherard (1979)[17], which noted that sinkholes in dams with broadly graded materials usually appears in connection to the first filling of the reservoir.

The fundamentals of protective filter design are to arrange the filter’s grain size curve so that the filter void openings are small enough to prevent and limit erosion from the base the filter is protecting. The generally accepted filter criteria nowadays in regards to filters for broadly graded base soils are based on the testing in the 1980s by the Soil Conservation Service (SCS) that amounted to the empirical guidelines proposed by Sherard & Dunnigan (1989)[20].

The aspect of filter coarseness is investigated for 45 dams in Rönnqvist (2007)[15] whereas here the compilation is of 73 dams. The filter “coarseness” is conveniently defined in the literature for design purposes in terms of the filter’s D15 (particle’s size at 15% passing weight).

Sherard et al. (1984a)[18] showed that the filter’s D15 is connected to the filter’s pore size and opening size (D15/9) that ultimately prevents finer graded particles from passing through. The filter maximum D15-distribution is presented in Table 2, which shows that 68% (50 out of 73 dams) have filters with D15 coarser than 0.7mm (the current governing filter criterion for broadly graded base material (Sherard & Dunnigan (1989)[20]).

In another inventory made only on Swedish embankment dams (Norstedt & Nilsson (1997)[12]), comprising 44 existing Swedish embankment dams, 64% do not satisfy current filter criteria. The situation appear similar for Norwegian moraine core dams; in Höeg (2001)[3] it is indicated that out of 122 Norwegian large rockfill dams with broadly graded moraine cores only few, if any, would satisfy today’s strict filter criteria. This suggests that the number of dams not satisfying the above mentioned filter criterion does not stand in relation to the dams with performance history of internal erosion, which suggests that the criterion is mainly intended for filter design (with built-in factors of safety) and less effective for analysis.

In the set of 73 dams where the filter D15 is coarser or equal to 1.4 mm 54% are dams with performance history of internal erosion (1-dams), see Table 2. D15 coarser or equal to 1.4mm is a suggested filter boundary in Rönnqvist (2007)[15] for assessment of internal erosion in moraine core dams. Foster & Fell (2001)[1] found that dams with poor filter performance generally have filters with an average D15 coarser than 1.0mm as one of the general characteristics of dams with poor filter performance.

Grading stability can be assessed using the method by Kenney & Lau (1985, 1986)[5][6]. A soil having a smaller volume of fines in relation to volume of voids between coarser load-bearing particles can be suffusive/internally unstable, i.e. finer particles risk passing through the openings between the coarser particles by seepage flow. The boundary between internally stable and unstable material (Kenney & Lau (1985, 1986)[5][6] shape curve ratio H/F = 1) is determined by the passing weight between particle size D and 4D. The interval of x4 being the size of the predominant constriction in a void network of a filter which is approximately equal to ¼ the size of the small particle making up the filter (Kenney et al. (1985)[4]).

A material is considered internally unstable if the Kenney & Lau (1985, 1986)[5][6] H/F ratio is less than 1, meaning that the soil assessed as unstable has a grain size curve with inclination flatter than that of the “Fuller curve” (which is the ideal gradation for optimum density).

In Fig. 2 the core’s internal stability, (H/F)min, is cross-referenced with the filter’s internal stability of the dams in the set. The plot is divided into “squares” of core/filter stability and instability. The (H/F)min on the axes is the minimum value of the ratio along the sieve curve within the Kenney & Lau (1985)[5] evaluation range of 0-20% passing weight (applicable to widely graded materials). There are 46 dams in the data set (27 dams of the total of 73 have incomplete records).

Filter internal stability against filter coarseness, as seen in Fig. 3, indicates that the coarser D15 of the filter, the more likely for filter grading instability and that the dam is a dam with performance history of internal erosion (1-dam). The data set in Fig. 3 consist of 52 dams (21 dams of the total of 73 have incomplete records). A

combination of core and filter internal stability with filter coarseness (maximum filter D15), separately seen in Fig. 2 and Fig. 3, indicates that out of dams with I) core and filter unstable and II) filter D15 coarser or equal to 1.4 mm, 73% are dams with a performance history of internal erosion (1-dams).

The concern for segregation of filters, especially regarding coarsely and widely graded filters, and its connection to internal erosion is discussed in many references; e.g. Ripley (1986)[13], Kjellberg (1985)[7] and Sherard (1979)[17].

A segregated material has separated into a finer and coarser zone. During processing, handling, placing, spreading or compaction of widely graded materials, there is a risk of segregation that can result in streaks or pockets of gravel and stones at the filterface, with insufficient finer grained material in the voids and resulting in reduced filter function.

Foster & Fell (2001)[1] found that maximum particle size in filter coarser than 75mm increases the likelihood for segregation. These guidelines are plotted in fig. 4 against y-axis with amount coarser than 4.75mm in the filter and x-axis maximum filter particle (max. particle sieved). The data of the 73 dams in the set is also plotted in Fig. 4, which shows that most filters in the dams are widely graded, having a fairly low amount of sand fraction and a large maximum particle size and thus having the properties which increases the likelihood for filter segregation.

When using data sets from Nilsson (1995)[10] and Nilsson et al. (1999)[11] no complete grain size curves were available, only specific grain sizes (e.g. filter D15, filter D50 and maximum sieved particle). In these cases some judgment was necessary in determining the amount coarser than 4.75mm.

Filter-transition components, in the form of transition layer(s) between the core’s protective filter and the shell material, are generally necessary if filter criteria compatibility is to be achieved between a moraine (till) core and the support fill, especially if the shell consists of rockfill.

In Rönnqvist (2007)[15], an investigation was made on moraine core dams and a method for assessing the potential for surfacing internal erosion was proposed.

With the objective of examining what other factors that possibly are influential on the potential for internal erosion, this study looks into not only filter coarseness and filter grading stability, but also the effect of filter segregation and absence of filter-transition components. By way of back-analysing the performance history of internal erosion afflicted dams and comparing with sets of dams with no observations to indicate internal erosion, there are statistically over-represented features traced back in dams with internal erosion. These features relate to core/filter interaction, filter properties and filter design.

Statistically, based on the data set of dam records of 73 dams in this study, the following core/filter properties have been shown to be over-represented among reviewed moraine core dams with a performance history of internal erosion:

• Grading instability of the filter.

• Grading instability of the core (base) soil.

• No filter-transition component (between the protective critical filter and the shell – applies to rockfill dams).

Based on the set of 73 dams with the above properties, there are in total 46 dams with complete records to be able to fully assess the factors (1)-(4); i.e. filter D15, filter and core internal stability, and filter susceptibility for segregation.