…and work underway on Hongyanhe 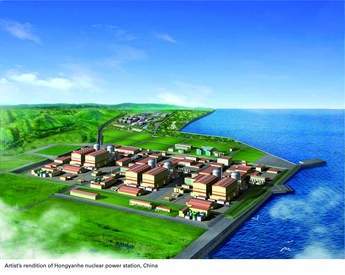 Meanwhile, in the north east of China, at the Hongyanhe nuclear power plant site, Donggang Town, Wafangdian, Liaoning province, 104 km north of Dalian City, construction is underway on nuclear units of a rather more conventional nature.

The plan is that the Hongyanhe station – the first nuclear plant in the north east of China, and part of an initiative to rejuvenate the country’s old industrial base – will eventually consist of six 1110 MWe 3-loop units of what is now called the CPR1000 design. This “improved Chinese PWR” is based on the pressurised water reactors supplied by Framatome of France (now part of Areva) for Daya Bay (2×984 MWe operating since 1994) and Ling Ao (2×990 MWe operating since 2002/3 and 2×1080 MWe under construction, with operation planned for 2010/11).

The first phase of Hongyanhe will consist of four units. Site excavation started in June 2006 and, according to developer/owner/operator, China Guangdong Nuclear Power Holding Co (CGNPC), “the nuclear island bases for unit 1 and 2 have passed completion acceptance.”

In August, L-3 MAPPS of Canada announced it had received an order from Mitsubishi Electric Corp of Japan (MELCO) to supply a full-scope simulator for the first two Hongyanhe units, with the simulator scheduled to be in operation in 2010. This will be part of a larger I&C package – called the CPR1000 Extension Project Digital Control System – that MELCO is supplying to the project, in co-operation with China Techenergy Co. L-3 MAPPS has previously provided simulators for Daya Bay and Ling Ao.

The operator of the Hongyanhe site is Liaoning Hongyanhe Nuclear Power Co, which is part owned (45%) by CGNPC, along with China Power Investment Corp (45%) and Dalian/Liaoning Municipal Construction Investment Co (10%).

CGNPC says “CPR1000 will be a major option for the construction of nuclear plants over the next phase (around ten years) in China.”

It says work on a further CPR1000 project, involving two 1080 MWe units to be built at Ningde in Fujian province, will start in April 2008. A total of six CPR1000 units is planned for Ningde, where site preparation is already underway. The first two units, a joint venture of CGNPC (51%) and China Datang Corp (49%), are due to enter commercial operation around 2012.

Taishan has very recently been named as a possible site for two Areva-designed 1650 MWe EPRs, although there appear to be no contracts yet.

A total of six units is planned for Taishan, which is identified as a priority project under Guangdong’s 11th Five Year Plan.

After some delays the second unit at Lianyungang/Tianwan entered operation on 16 August, with handover scheduled for mid September. The Russian supplier Atomstroyexport has a contract to build two more units at the site, which could accommodate a total of eight reactors.

There is a widely quoted Chinese target of having 40 GWe of nuclear installed capacity by 2020.