An air of anticipation: the forthcoming HUSUM Wind show

With Germany’s goal to boost reusable energy generation from now until 2020, the Husum Wind show in September promises to be an outstanding experience. 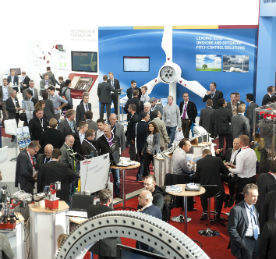 Germany has set itself ambitious targets for combatting climate change, which include increasing the overall share of electricity generated from renewable sources to 35% by 2020. One of the most important pillars for achieving this goal is wind power, a field in which the country is already making good progress. Onshore wind power has been an integral part of energy generation for years, and the increase in offshore wind power has recently passed the 2GW mark.

The nationwide effort, combined with the expansion of the grid infrastructure, ensures that wind power will also contribute to the base load supply in the future – a development that would have been considered a pipe dream 25 years ago. In the meantime, not only has wind power become a key element of energy generation, it has also created an entirely new branch within the industry consisting of about 138,000 employees.

An important part of this development is the constant exchange of ideas and experiences at trade fairs, for which the biennial Husum Wind event is assuredly the trailblazer. The first fair, with 20 exhibitors, was held in 1989 at the local livestock auction hall, which is why Husum and Schleswig-Holstein are considered the cradle of the wind sector in Germany. The trade fair has constantly developed in parallel with the wind industry, and Messe Husum and Congress in Husum will once again open its doors on 15-18 September for the highlight of the year in wind energy. The focus of Husum Wind 2015, at which 20,000 visitors and 600 exhibitors from 24 countries will enjoy an outstanding experience, will be the important core German market.

In Schleswig-Holstein’s wind pioneer country, businesses, associations and institutions from all branches of the onshore and offshore wind sector will be showcasing their services and innovations – from turbine manufacturers and utility companies to maintenance firms and suppliers. The list of exhibitors reads like a who’s who of the industry. And the practical relevance in Husum is unique, with numerous wind farms, production plants and other relevant locations in the vicinity of the exhibition site, to which a number of selected excursions will be organised.

Husum Wind is also famous for being the traditional meeting place of the industry, offering intensive exchanges of ideas and experiences, as well as representing practically oriented added value. The accompanying conference is also a forum for discussing issues relating to wind energy and energy transition.

The programme will be rounded off with the Windcareer job fair, which brings businesses together with potential employees and presents the types of careers available.

Patron of the forthcoming trade fair is German Minister for Economic Affairs, Sigmar Gabriel, and this year’s state partner is Baden-Württemberg, which is pushing to expand its number of wind turbines.