In April E.ON’s 302 MW offshore wind farm Amrumbank West officially started commericial operations. The wind farm is situated 35 km north of Helgoland in the German North Sea and has an installed capacity of 302 MW. E.ON is investing a total of € 1 billion in the project – renewables is one of the pillars of the new E.ON’s strategy. At the beginning of the year E.ON spun off its conventional energy assets, most notably conventional power plants and global energy trading, into a separate company called Uniper. 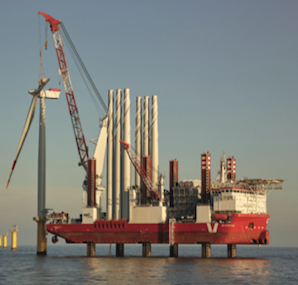 The Amrumbank project was developed by E.ON Climate & Renewables and is the company’s first commercial wind project in Germany. Construction of the wind farm began in January 2014 and commissioning was completed in October 2015. It consists of 80 Siemens SWT-3.6-120 wind turbines rated at 3.6 MW, installed over an area of 32 square km in sea depths between 20 and 25 metres and supported by 800 tonne steel monopole foundations with a diameter of 6m and height of 70m. The turbines have a rotor diameter of 120 m and a hub height of 90 m, and are interconnected by 33kV infield cables over a total length of 86 km.