Genset specialist Aggreko is boosting Kenya’s national grid by providing temporary support power vital to the country’s farming industry. At 100 MW it is the largest temporary power plant that the company has ever delivered. 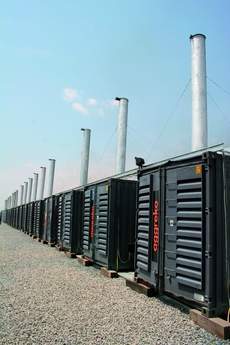 The persistent drought in Kenya is causing severe power shortages across the country as around 74 % of Kenya’s electricity is generated by hydropower in the Tana River basin and the Turkwei River gorge. The long rains normally experienced from March to May failed this year causing a dramatic drop in water levels at many of the reservoirs that supply the hydroelectric plants, resulting in a serious decline in the country’s ability to generate sufficient power for its population and industries.

The effect on Kenya’s export industries is proving catastrophic. Much of the country’s exports are based on fresh farm produce, and the lack of a reliable power supply creates havoc with irrigation and temperature controls in both green houses and cooling houses. Power is needed for pumping water, post harvest handling and for cooling before grading. In fact, many farms may be forced out of business if the power crisis is not ended. Closures would result in workers being laid off across the country and the loss of market share to other countries. Other countries in the region – Rwanda, Uganda and Tanzania – are also being affected.

Much of East Africa is dependent upon hydropower for its energy supplies. As with most of the world’s developing regions, the power demands of both population and industry are increasing steadily, and it is frequently the case that investment in new power infrastructure has not kept pace with the rapidly rising demand curve. Therefore, when a prolonged drought occurs, the effect on power supplies is disproportionately severe.

To alleviate the severe power shortage the country’s state owned utility, Kenya Electricity Generating Company Ltd (KenGen), awarded a contract to Aggreko for the provision of a 100 MW temporary power plant to support the national grid and ensure uninterrupted power for Kenya’s industrial sector. The contract is estimated to be worth approximately US$34 million over a twelve month period.

The temporary plant will assist the Kenyan authorities in maintaining reliable power supplies and thus support Kenya’s continued economic growth. In fact, without additional generating capacity KenGen – which is wholly owned by the Kenyan government and is responsible for public power generation – would be unable to maintain supplies. The 100 MW will account for about 10 % of the country’s total capacity.

The contract was awarded to Aggreko following an open tender advertised world wide. The power plant tender was eventually taken up by sixteen companies, five of which submitted bids. The official opening of the bidding was carried out in public with bidders’ representatives and Kenyan officials present.

Implementation of the contract

Following the contract award, Aggreko immediately started to mobilise the equipment needed for the temporary plant from its regional headquarters in Jebal Ali, Dubai. This work was carried out in planned phases with commissioning completed in August 2006. The power plant is located in the city of Embakasi next to an existing KenGen substation, and is synchronised to Kenya’s national grid.

The scope of the contract award makes Aggreko the turnkey supplier of the power plant: scope of supply includes the plant’s generators, transformers, switchgear, control rooms, fuel tanks, fuel management, and other ancillary equipment and services. The contract award also included the commissioning and the operation and maintenance of the plant. Engineers from the company are manning the plant continually to ensure that it operates at the specified efficiency.

An overall understanding of the supply logistics that can help avoid problems is a vital factor in the smooth running of supplying, installing, commissioning and operating any power plant in this region. The fact that the company had supplied a similar temporary power plant to KenGen some years before helped it to win this contract. The company has been running plants of this sort in Africa for many years.

For the Embakasi plant it is essential that throughout the contract period there is a close working relationship between both KenGen’s and Aggreko’s operating and management personnel. This operational association between the two extends from operations (daily) through to senior management (weekly and monthly), an ongoing liaison that ensures, say Aggreko, that the project runs smoothly.

The contract has been awarded over a fixed term, with the time frame being estimated by Kenya’s government officials. However, should the rains come early then an early termination could be negotiated. On the other hand, should the rains fail to materialise again then an extension of the contract period can be discussed. This flexibility of contract is one of the main advantages of rentals.

This contract with KenGen is Aggreko’s second utility contract in Kenya. Under the first emergency power supply contract, which was awarded in 2000, Aggreko provided a 45 MW, 11 kV power plant also at Embakasi in Nairobi for a period of ten months. Aggreko area director Robin James believes that it was Aggreko’s performance in Kenya in 2001 and 2002 that underpinned the company’s successful bid for the KenGen contract.

Back in 2000, Kenya was experiencing similar drought conditions to those of today. The country faced a crippling power shortage after the failure of seasonal rains reduced, or in some cases stopped, the output of the hydroelectric power plants. Power rationing was introduced, costing the economy an estimated US$10 million a day in lost production and exports. In response, the Kenyan government, with support from the World Bank, issued a competitive tender for the emergency supply of a large temporary power plant at Embakasi in Nairobi.

The contract was awarded to Aggreko who supplied, installed, commissioned and operated the 45 MW/11 kV plant. A full range of equipment was provided including generators, transformers, switch gear, control rooms and fuel tanks plus other ancillary equipment. First power was sent to the Kenyan grid at Embakasi within three weeks of the effective contract date.

Engineers from Aggreko manned the plant on a 24-hour basis to manage operations and to ensure that the equipment operated at peak efficiency. The plant provided baseload power to the grid continuously for ten months until the country’s reservoirs had been replenished. Throughout the execution of the contract, Aggreko maintained high availability of the equipment and supplied the temporary power to KenGen’s satisfaction. In fact, 100 % equipment availability was maintained throughout the duration of the contract.

This power plant contract award represents, at 100 MW in a single location, the largest temporary power plant Aggreko has delivered, and it is the third major contract it has won in East Africa in the last 12 months. In 2005, Aggreko installed 50 MW in Uganda and 15 MW in Rwanda.