American Electric Power is expanding its use of large-scale battery technology on its electricity grids, as a step toward its goal of installing 1000 MW of advanced storage. 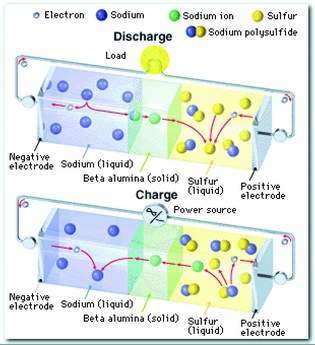 AEP, the only US utility currently using advanced energy storage technology as part of its electricity infrastructure, will be adding sodium sulphur (NaS) battery storage facilities in its West Virginia and Ohio service territories next year. Its primary purpose will be to reduce fluctuations by load levelling and peak shaving.

The company will also work with wind developers to identify a third location within AEP’s 11-state service territory for NaS battery deployment next year, using the storage capability to help offset the intermittent nature of wind generation. AEP has placed an order for the three new batteries with NGK Insulators of Japan, the manufacturer and co-developer, along with the Tokyo Electric Power Co, of the technology. AEP anticipates delivery in spring 2008. The 6 MW that will be added to the system is a step toward the company’s goal of having at least 25 MW of NaS battery capacity in place by the end of this decade, with a longer-term goal to add another 1000 MW of advanced storage technology to its system in the next decade. The full spectrum of available technologies – flow batteries, pumped hydro, and various other technologies in early stages of development today – will be assessed by AEP during this period to determine their feasibility and potential for commercial application.

The first installation, described as being of 2 MW capacity, will be near Milton, West Virginia, to enhance reliability and allow for continued load growth in that area. AEP will also add 2?MW at a site near Findlay, Ohio, also to enhance reliability, provide support for weak sub-transmission systems and avoid equipment overload. A specific site for the third NaS battery, which is expected to be integrated with wind generation, will be announced in due course. The combined cost of the three installations, including associated site preparation, equipment and control systems, will be approximately $27 m.

In 2006 AEP installed the first MW-class NaS battery system to be used on a US distribution system. That installation, on a substation near Charleston, West Virginia, operated by AEP utility unit Appalachian Power, delayed the need for upgrades to the substation. A similar, but much smaller, NAS-based system installed in 2002 at an AEP office park in Gahanna, Ohio, was the first US demonstration of the NaS technology.

The deployment of additional advanced storage capacity is part of a wider AEP plan to prepare the company’s 11-state distribution system for its future role. “We … will be making changes to transition our system to the grid of the future,” said CEO Michael G. Morris, “We are examining the current and likely technologies under development that could meet those needs. We’re also testing distributed energy resources and ‘smart grid’ or ‘self-healing grid’ technologies designed to seamlessly separate sections of the distribution grid when problems develop elsewhere, with customers seeing no disruption in power supply or quality. But implementation of these technologies is a bit further off.”

Elecrolytic processes during charge and discharge

The purchase of storage facilities is complementary to AEP’s purchases in the renewables area, particularly wind, and its desire to have facilities in place to improve availability. In 2001 it acquired the 150 MW Trent mesa Wind farm and shortly after the 160 MW Indian Mesa Wind power project from Enron Wind

Coupled with 310 MW of wind generation that it has owned and operated in Texas for some years, and recent power purchase agreements, the total wind energy portfolio that AEP can rely on now amounts to 1050 MW, and establishes it as one of the largest renewable power generators in the USA.

AEP tested and accumulated performance data for a 12.5 kW NaS battery at its Dolan Technology Center during 2001. The battery was tested for its peak shaving ability, and was put through staged power quality tests to determine its overload capability. Depending on their capacity, NaS batteries can supply more than five times their nominal rating for up to 30 seconds. The batteries can supply lesser multiples of their capacity for longer periods, for example, four times capacity for 15 minutes. This flexibility allows a broad range of applications.

NGK developed the key component of the NaS battery – a beta alumina sodium ion conducting ceramic electrolyte material that separates the positive sulphur and negative sodium electrodes. Approximately 2V is generated between anode and cathode at about 300 °C. During discharge, sodium ions converted from sodium at the cathode pass through solid electrolyte to the anode. Sodium polysulphide is formed at the anode. During charging, electric power supplied from outside forms sodium at the cathode and sulphur at the anode. Sodium ions therefore shuttle back and forth between the electrodes depending on whether the battery is charging or discharging. Because beta alumina is employed, the battery is free from secondary reactions caused by the charge/discharge cycle.

The thermal energy created by internal resistance is at the right level to keep the battery warm. As a result, it can operate at high efficiency levels. Each hermetically sealed cell is kept at approximately 300°C and is operated under conditions such that the active materials at both electrodes are liquid and its electrolyte is solid. At this temperature internal resistance drops to a low level, giving the battery an excellent performance characteristic. And because of its ability to switch smoothly from charging to discharging, the battery can be in continuous use.

A battery module contains many single cells in a thermal enclosure which is equipped with an electric heater to raise or maintain temperature. Each module battery has a heat insulating structure, inside which a vacuum is maintained along with inbuilt safety devices.

The single cells are densely arranged and connected with metallic bars inside the enclosure. This module is the basic unit for a system.

The NaS rechargeable battery, developed jointly with Tepco, can function as a small short term power station by charging from base load sources during low demand periods and discharging at peak demand.