An Advanced Hydro Turbine System was operated at Wanapum dam on the Columbia river, US, to improve fish passage through the project, explains Thomas J. Dresser Jr. 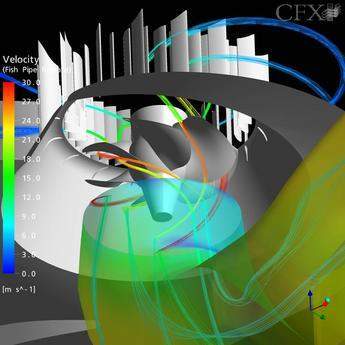 THE Priest Rapids project on the Columbia river is owned and operated by the Public Utility District No. 2 of Grant County (Grant PUD) in eastern Washington state, US The 1755MW project, which consists of the Wanapum and Priest Rapids hydroelectric facilities, is the largest non-federal hydroelectric project of its kind in the US. In 2002, the project produced a total of 8.85BkWh, with the electricity sold on a non-profit retail basis to Grant PUD customers and wholesale to utilities. Grant PUD is currently in the process of applying for a new 50-year license for the project from the Federal Energy Regulatory Commission (FERC).

Six anadromous fish species are known to inhabit or migrate through the Priest Rapids project. Four of these fishes are classified as anadromous salmonids including: Spring, Summer, and Fall Chinook salmon; Summer Steelhead; Coho salmon and Sockeye salmon. Of these, only Fall Chinook are known to both spawn and actively rear within the project area: Spring and Summer Chinook, Steelhead, Coho and Sockeye migrate through the project area as adults returning to upriver spawning areas, while Smolts travel through the project on their downstream migrations. Only Upper Columbia river spring-run Chinook salmon and steelhead are on the Federal Endangered Species list.

In October 2003, Grant PUD submitted an application to FERC requesting authorisation to operate and test an Advanced Hydro Turbine System (AHTS) at Wanapum dam, where 70% of the juvenile salmon use the turbine passage route. In July 2004, FERC issued an order modifying and approving an amendment of license application authorising the replacement of the nine remaining units, provided the operating criteria and biological testing results indicated at least equal or better survival for migrating smolts over the existing turbines.

The AHTS includes featured elements for improved fish survival, operational performance, and reduced maintenance costs. Specific items include reshaping the stay vanes, new smaller wicket gates that are in line with the stay vanes (to eliminate discharge ring overhang), a spherical runner and discharge ring to eliminate gaps at the hub and discharge ring, reshaping the draft tube to improve hydraulics and reduce re-circulation and turbulence, installation of a larger runner diameter (775cm instead of 724cm for the existing units), higher output rating (150,000hp instead of 120,000hp), more wicket gates (32 instead of 20), and inner and outer head covers.

Grant PUD consulted with resource agencies and tribes to design an evaluation to statistically test the hypothesis that the passage survival of yearling Chinook salmon smolts through AHTS turbine Unit 8 was equal to or greater than survival in passage through an existing turbine, Unit 9. A randomised block experiment with a factorial treatment design of two turbines, three intake bays (within each turbine), two entrainment depths (3m and 9m below the intake ceiling), and at four operating flows (discharges of 255, 311, 425 and 481m3/sec) was implemented to test the hypothesis. The randomised block experiment with a factorial treatment design resulted in 48 separate and different treatment combinations. The 48 independent survival estimates were also used to assess the effects and interactions of turbine types, entrainment depth, intake bay, and discharge.

The evaluation was conducted during February through April 2005 by releasing 7205 balloon-tagged and radio tagged yearling Chinook salmon directly into the AHTS and an existing turbine. Juvenile salmonids were tagged by two tag types – balloon tags and radio tags. Balloon tags allowed researchers to effectively and efficiently retrieve fish after they had passed through the turbine so they could be examined for injuries, such as de-scaling, strikes, pressure injuries and mortality. The radio tag is attached for tracking and recovery. Once a fish is tagged, it is released into an induction pipe that provides entry for the fish into selected depths within the turbine (3m and 9m below the intake ceiling). Passage through the turbine takes about seven seconds and once a fish passes through, the balloon tags inflate and the fish rises to the surface where it is collected, examined and then held for 48hrs, during which time it is examined again for any sign of injury. In addition to the release of live fish, approximately 1000 sensor fish were also released. Sensor fish recorded pressure and acceleration time histories as they passed through the turbine. Each sensor fish was also equipped with balloon tags and a radio tag to aid in recapture after passage. Sensor fish are instrumented packages with probes to measure hydraulic parameters of pressure and acceleration changes that may impede fish during passage.

A very notable finding of the biological testing was the observed overall survival in both turbines. Direct survival for juvenile salmonids passing through both the AHTS and existing turbine was 97%, which is generally better than results obtained at other hydroelectric projects on the Columbia river basin. The overall passage survival based on uniform distribution for the AHTS was 96.9% (SE=0.0071) and 97.5% (SE=0.0049) for the existing turbine. Based on the data there was no significant difference in the overall passage survival between the both turbines. Researchers also determined that point estimates of survival probabilities of fish that entered the turbine intake at 3m depth in the AHTS always exceeded those of the existing turbine. The overall 3m depth average survival for the AHTS was 98.5% (SE=0.0064) and 97.9% (SE=0.0058) for the existing turbine. At no discharge level were the survival rates significantly different (P>0.05). The overall average survival for 9m entrained fish was 95.4% (SE=0.0064) for the AHTS and 97.1% (SE=0.0066) for the existing turbine. It is likely that the post-passage disposition of fish released in the AHTS at 255m3/sec particularly during one of the testing blocks contributed to these differences. In a single block, for the 9m release depth at 255m3/sec, 30% of the fish were either assigned as a mortality or were mortalities at recapture, as fish predator activity increased substantially during the last testing block.

Based on the information observed at the 9m release depth, researchers will use Computational Fluid Dynamics (CFD) modelling to gain further insight into the effects of turbine operation on fish passage survival for the AHTS. CFD will be used to determine the characteristics of the flow field along the paths calculated for pressure, velocity gradients, acceleration associated with fish sized bodies, determine the velocity gradients at the structures where fish-structure interaction is predicted, correlate the estimated fish location of passage with observed injuries and correlate the calculated pressure and acceleration with the information recorded with the sensor fish.

The above survival estimates were based on the assumption that naturally emigrating juvenile salmonids exhibit a uniform distribution once entering a turbine. However, literature and field experience indicates that most surface-oriented juvenile salmonids may enter the turbines in the upper water column. Researchers therefore believed that it was prudent to calculate overall passage survival based on observed vertical distribution for Chinook salmon at the AHTS and existing turbine.

At Wanapum dam in 1984, 78% of the yearling Chinook salmon sampled in the turbine intakes entered in the top 5.5m, while the remaining 22% were captured at lower depths (5.5 to 16.5m). After weighting for the potential vertical distribution of yearling Chinook, the AHTS had an overall survival estimate of 97.8% compared to the existing turbine survival of 97.7%. The increase in survival for the AHTS is due to the majority of the fish (i.e. 78.4%) passing through the upper portion where the AHTS had higher survival. The vertical weighting had little effect on the overall survival through the existing turbine, where passage survival was similar between depth levels.

The primary objective of the study, a test of the hypothesis that the fish survival in passage through the AHTS (Turbine Unit No. 8) is equal to or exceeds the survival through an existing turbine (Unit 9) was fulfiled. Statistical analysis indicated that the hypothesis of equal survival through the two units could not be rejected (P > 0.2538). Based on the evaluation results Grant PUD plans to continue with the replacement of the remaining nine existing turbines at Wanapum dam with AHTS over an eight-year period.