Rights to develop nine large offshore zones have been awarded under Round 3 of the Crown Estate’s bidding process – potentially taking offshore wind to a whole new level in terms of scale, water depth and distance from shore 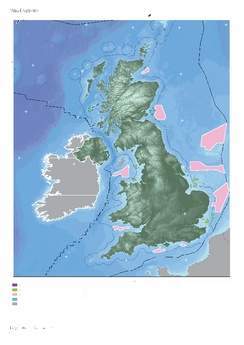 Offshore wind took a further major step forward on 8 January with the announcement by the Crown Estate of successful bidders for exclusive rights to develop nine large zones within UK waters, estimated to be capable of accommodating some 32 GW of installed capacity. This is essentially the “starting gun” for what could become one of the world’s largest energy infrastructure initiatives, potentially an investment in the region of £100 billion – but go/no go project investment decisions will not be taken for another 2-4 years, following project consenting and grid connection processes.

The bidders have signed exclusive “zone development agreements” with the Crown Estate, the national body which acts as the landlord and steward of the seabed within the boundary of the UK continental shelf.

The new agreements constitute “Round 3” of the Crown Estate’s competitive tendering process for awarding offshore wind development rights. The bidders were required to address a number of categories including: health and safety; relevant experience and capacity; organisation and management; delivery plans for the development phases, including programme, methodologies, resources; and financial strength and funding commitment. Bidder teams were also required to respond to questions and challenges in a panel interview, after which preferred bidders were invited to the final phase of commercial and legal negotiations.

Round 1, launched in 2000, consisted of demonstration projects, while Round 2, initiated in 2003, focused on larger, commercial scale, schemes around the coast of England and Wales, including the London Array. Round 1 and 2 operators have also been invited to apply to extend their lease areas, with the outcome expected to be announced in the first half of 2010. Meanwhile in Scotland a process basically equivalent to Round 2 has been carried out, with exclusivity agreements signed for ten wind farms in Scottish territorial waters.

However, Round 3 represents a significant step change from what has gone before in terms of scale, water depth and distance from shore (see map). It also has a very ambitious timetable: “Round 3 offshore wind energy generation aims to deliver a quarter of the UK’s total electricity needs by 2020,” says the Crown Estate.

Considering the UK’s commercially operating offshore installed capacity currently stands at less than 1 GW (albeit the largest in the world) this is going to take some doing.

The Crown Estate has taken a number of measures aimed at reducing the risks and improving the chances of delivery. In particular, the Estate will be actively involved in development to

the consent stage, partnering with the

nine consortia, sharing development risks and making available more than £100 million in financial investment. Other measures have included “a robust selection of parties capable of developing, constructing, financing and operating offshore wind projects”, “a zonal approach to assess cumulative impact, engage holistically with stakeholders and improve supply chain confidence”, the use of the Crown Estate’s Marine Resource System (MaRS) tool to provide a “transparent and rational approach to site selection” and “engagement with stakeholders over national and zonal issues to highlight issues early and build long-term relationships.”

A programme of “enabling actions” started in 2009, including aerial bird surveys, marine mammal research and funding for the industry aviation plan, while a series of supply chain events is being held in the first quarter of 2010.

As another manifestation of its active involvement the Crown Estate is also participating in efforts to develop a 10 MW (formerly 7.5 MW) offshore version of the Clipper wind turbine, and has undertaken to purchase the prototype, which is scheduled for deployment in late 2011.

The nine zones and their developers

In order of target installed capacity, the nine new zones and their developers are as follows:

Forewind says it will now begin to carry out the extensive surveys, assessments and planning required for the consent process, with a commitment to secure all the necessary consents for construction and development, up to the point of an investment decision, which is anticipated late 2014 or thereabouts. If developed it is likely to be the world’s largest offshore wind project. Zone 3 is thought to have the potential for 13 GW of installed capacity.

• Norfolk Bank, 7.2 GW, East Anglia Offshore Wind Ltd, equally owned by Scottish Power Renewables and Vattenfall Vindkraft – ZONE 5 (total area 6036.8 km2, but not all of it will be developed, about

There is potential for a number of windfarm sites within the Irish Sea zone but not all will be developed, key considerations being: environmental constraints; shipping; fishing; oil and gas activity; aviation and radar; and connection to grid. Centrica says the zone was its preferred location due to proximity to the shore, water depth and grid connection potential. Centrica has already built and refinanced Lynn and Inner Dowsing and expects to start construction of Lincs (in which a joint venture of Dong and Siemens Project Ventures is taking a 50% share) later this year.

30 and 40 m, with a maximum of 70 m). Mainstream is also developing the 1 GW Horizon offshore project in Germany, as well as Neart na Gaoithe in Scottish waters. Siemens, which has located its offshore

grid connection competence centre for northwestern Europe in Manchester, UK, will supply the wind the turbines and offshore substations, while Hochtief will construct other parts of the wind farms.

SSE and Fluor jointly developed the first of the Round 2 projects, the 500 MW Greater Gabbard farm, currently the world’s largest offshore windfarm under construction, due for completion in 2012.

MORL says it will now undertake extensive data gathering in the zone, which will take about 24 months, followed by application for planning consents, in early 2013, and notes that “the zone is expected to require an aggregate investment of around £40 million (SERL £10 million) up to the point of consent.”

SERL, a subsidiary of SeaEnergy plc (formerly Ramco), which describes itself as “the only listed pure play offshore wind energy company in the UK”, is made up of the team (with extensive oil and gas expertise) that “conceived, developed and delivered” the 2 x 5 MW Beatrice demonstration project (owned and operated by Talisman Energy), which, at a depth of 45 m, can claim to be the world’s first deep water wind farm.

Prior to the UK Round 3 award SERL already held a 25% interest in two other joint ventures to develop offshore wind farms in Scottish Waters: a 920 MW farm at Beatrice, with SSE (Airtricity); and the 905 MW Inch Cape project, with RWE Npower. SERL has also signed a heads of terms agreement to develop offshore wind farms in Taiwan with Taiwan Generations Corporation, the first project of which provides a minimum capacity net to SERL of 150 MW.

Eneco is owner/operator of the Princess Amalia wind farm off the Dutch coast.

In a briefing document put out to coincide with the Round 3 announcement, the British Wind Energy Association (currently in the process of changing its name to RenewableUK) says that the key obstacles to developing Round 3 “are a lack of offshore grid connection, rising production costs and limited existing supply chain capacity.”

The government is taking a number of initiatives to incentivise offshore wind and help address grid connection issues (see MPS, September 2009), but meeting the Round 3 schedule will be very demanding.

The BWEA notes the industry is experiencing a ‘cost hump’, from £1.5 million per MW in early Round 1 to around £3.1 million for Round 3” – driven by the falling exchange rate, historically high commodity prices and lack of competition among manufacturers.

However BWEA believes that costs will reduce as the industry expands, with falling material prices, establishment of a UK based supply chain (avoiding import costs), increased competition, new technology (including larger turbine unit sizes, 6 MW and higher), and of course the benefits of learning by doing.

BWEA thinks the dramatic increase in market size represented by Round 3 will attract several new players into the offshore turbine business and expects six manufacturers to be in the market by 2015. It also draws attention to some new factory developments, eg JDR Cable’s new interarray cable facility at Hartlepool and Skykon’s investment in new capacity at their Welcon Towers subsidiary in Campbeltown, but points out that Round 3 potentially represents a dramatic increase in demand.

While offshore wind is of course inherently more challenging and expensive than onshore, this is offset by a number of benefits, not least the high load factors, around 50% (40% after losses) or more for Round 3. A number of Round 2 projects expect load factors over 40%, while those for Round 1 sites range from the low to the high 30s.