Exhaust from two gas turbines will be used for feedwater heating at a German lignite fuelled plant, bringing efficiency gains, on top of increased generating capacity and greater ability to meet grid requirements. 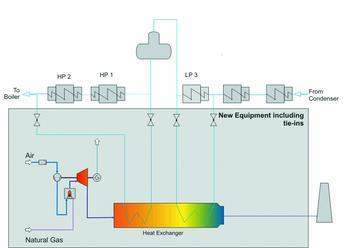 Weisweiler, in the Rhine brown coal district close to Eschweiler, can look back on a long tradition of power generation from brown coal (lignite), with the start of open mining in 1909 and a decision to build a lignite fuelled power plant in 1913, which operated from 1914 until 1975. The first of a new tranche of lignite fired blocks started up in 1955. There are currently six units in operation at the site, the last entering service in 1975, with nominal capacities of 2×150 MWe, 2×300 MWe and 2×600 MWe.

Over the years the blocks have been modified to meet changing requirements, notably on emissions, with all units now equipped with flue gas desulphurisation and measures to reduce NOx. Other modifications have included turbine retrofits, disconnection from district heating, integration with a new waste incineration plant nearby, and, since 2000, use of sewage sludge as a fuel (mixed with the lignite).

To augment capacity, increase flexibility, raise efficiency and help meet grid requirements, the decision was taken to add two gas turbines to the site, integrated with the 600 MWe units.

In October Lurgi Lentjes announced it had been awarded the e130 million contract to install the two gas turbines, two large heat exchangers and the related equipment.

Once completed, the new configuration will consist of two Siemens V94.2A gas turbines each producing about 190 MWe to be fed into the grid.

In addition, waste heat from the exhaust of the gas turbines will be used to preheat the feedwater of the lignite fired boilers, rather than using steam extracted from the steam turbines, via one LP and two HP preheaters, as in the present configuration.

This means more steam is available in the existing steam turbines, allowing an additional 80 MWe of electricity to be generated per boiler.

The new equipment will be operated in parallel with the existing boilers, and its role is envisaged as being mainly in the mid-load region, operating for around 4000 hours per year.

The Lurgi Lentjes contract will be carried out in two phases, the first being devoted to permit engineering, the second covering delivery, assembly and commissioning subsequent to permission being granted.

The first gas turbine plant is scheduled for commissioning in July 2006, and the second in December 2006.

TablesBasic data for the modified plant