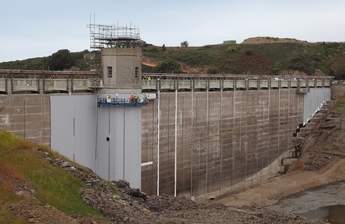 First constructed in 1962, the Val de la Mare dam holds back 900M litres of water, making it the second largest reservoir on the island of Jersey. The concrete on the dam is suffering from an alkali aggregate reaction and this created the need for the inside face to be covered with a heavy-duty waterproof membrane to re-seal the dam. This will prolong the life of the dam for many years, but required the reservoir to be drained so that the inside face could be accessed.

“This was a very unusual and difficult project which is why a totally bespoke solution was required,” comments Harsco Project Manager Jon Herbert. “It is the first time the reservoir has ever been partially drained and the project had a very tight schedule as the reservoir needed to be refilled as soon as possible.

“The fact that the trades were working at height, and also above water, made this a very complex project. Access to the façade had to be from the walkway on top of the dam wall which was very narrow. This had to remain clear throughout the project to allow the waterproof membrane to be positioned and unrolled down the inner façade. This was achieved by designing a walk-though, ‘tunnel-like’ support structure from scaffolding and shoring MkII Soldier materials.”

Five suspended access cradles were suspended from the load bearing framework and four were fitted with motorised bogies which allowed them to traverse along the façade as well as up and down. This was made possible by a steel support track supported on the underside of the load-bearing framework structure. The fifth suspended access platform was a specially designed and fabricated horse-shoe shaped machine that provided access to the pump tower. This platform was specially designed with six separate winching units which were also supported by the load bearing framework structure. This arrangement of access platforms and egress to the top of the dam’s façade allowed both the team of membrane installers and concrete repair specialists complete access to the façade.

“It was a terrific piece of teamwork to get this project up and running,” comments Project Manager Nathan Clothier, of civil engineering contractor Jayen Ltd which was responsible for the refurbishment work. “We needed a real bespoke access solution to solve a difficult set of requirements. Harsco’s response was really well thought through and they were even able to build a test section of the support gantry for the project team to evaluate prior to work commencing. The schedule on this job was particularly tight so the access system had to be really effective and I’m happy to say that the suspended access platforms worked very well.”