A tale of two eco-cities

Dong Tan, near Shanghai on China’s southeast coast, and Masdar City, Abu Dhabi, both represent an ecological dream of the future, large cities where whole communities of people can live normal modern lives in all but one respect – they will have a zero carbon footprint. Recently, both schemes have suffered setbacks. But while there are some superfical similarities between the two situations, the underlying reality could not be more different. Masdar might be called a strategic withdrawal. At Dongtan the troops have vanished from the field. 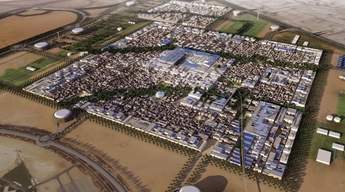 Located 17 km south-east of Abu Dhabi City, Masdar is conceived as a 6 million square metre sustainable micro-city, designed by Foster + Partners with developer Abu Dhabi Future Energy Company (ADFEC). Based on the principles of a walled city, but acting as a high-tech global centre for renewable energy and environmental initiatives, the £15 billion development is set to be zero carbon and zero waste.

The Masdar Initiative (Masdar means ‘the source’ in Arabic) was established by Abu Dhabi’s ruling dynasty which has pioneered environmental conservation in the country. It aims to become the source of energy, knowledge and innovation in order to position Abu Dhabi as a global leader in the energy industry, in technology and in sustainability.

At the centre of this initiative is Masdar City, now in the very early stages of construction, a zero carbon, zero waste town whose builders are investing in a range of new energy technologies, establishing a post-graduate research institution and developing a carbon management unit. All these activities, and a range of other initiatives, are aimed at laying the groundwork for economically sound and sustainable new industries that in the long term will generate a steady flow of new ideas and technologies. They are intended to transform Abu Dhabi’s economic role, completing its transition to a sustainable 21st century high-technology economy.

Masdar, which is driven by ADFEC on behalf of its parent, the state-owned Mubadala Development Co, has ambitions beyond building the new city. It is also active in securing the financing for renewable energy projects elsewhere (eg Torresol in Spain), signing development initiatives with governments as far apart as North Korea and Canada, hosting global new energy conferences and in taking part in initiatives aimed at promoting clean technologies. It has signed co-operative agreements around the world to promote collaboration on clean and sustainable energy technologies including an MOU with the US Department of Energy.

When Masdar was conceived in 2006 during an economic boom, its planners were charged with designing a city that would be carbon-neutral, large scale and lucrative.

The main bulk of the city would contain 1500 businesses together with residential areas, joined to satellite areas containing manufacturing, technology and energy clusters; civic buildings, the ADFEC headquarters, the technology institute with shops and other amenities would form the city centre with public spaces and the kind of narrow pedestrian walkways that offer shade. This shading with solar collectors and cool air drawn upwards from artificial underground caverns would help keep the thermal balance.

The first phase would focuses on ADFEC’s own 7-storey headquarters building, which would include commercial, retail, residential and public areas, and be energy positive – able to produce more energy than it consumes by making use of natural ventilation, ground source cooling and wind turbines.

But now, four years later, following a review of the development plan, Masdar officials have unveiled a new strategy for building the city at a time of reduced demand for property, incorporating lessons learnt about the limits of clean energy and transport technology. Masdar now aims to finish the first stage – the Institute, the headquarters building, solar fields, some of the infrastructure – by the end of 2013 instead of th planned end-2010. Masdar plans to cut costs, and has laid off 34 people from its property division, accounting for about 20 % of its staff.

Ultimately then Masdar City will look rather different from the original high concept. Some planned villas will be scrapped in favour of more efficient apartment buildings and many commercial spaces will be larger. There will now be fewer buildings, and the structures will be built taller (and therefore more efficiently) over a longer period of time. Expected public transport systems linking Masdar to Abu Dhabi island have also been delayed while plans for a futuristic ‘car pod’ system may be scaled back.

Although the original plans are to be scaled back, the Foster + Partners designed Masdar Institute, which was meant to be finished last year, is under construction and aiming to open by September 2010.

Meanwhile the official word from Masdar is that the master plan is still under review with a more detailed update expected in the coming weeks. Work on the city has not stopped, and the opening of its first building, the Masdar Institute of Science and Technology, is on schedule for later this year. There are several adjacent buildings planned that provide services for the institute, and work on these is also currently underway. Reputedly there are soon to be new projects announced by the Power and Carbon business units of Masdar as well as the venture capital arm.

The 10 MW solar power plant is complete, operating, and providing all the electricity for the construction of the Masdar offices and other construction taking place on the site. Currently the demand is around 3-4MW with the balance being fed into the Abu Dhabi grid.

At the heart of this new thinking is the change in the property market. When Masdar unveiled detailed plans in 2008, property prices were climbing, and rapidly rising oil prices suggested a bright future for alternative energy sourves. The scheme attracted global attention with plans for a US$22 billion development that would serve not only as a grand experiment in future technology, but also as a commercial venture that would help diversify the economy away from fossil fuel exports.

But last summer executives at Masdar decided that some assumptions would have to change. Crucial elements such as energy sources and transport technologies were reconsidered. Less rigorous standards of carbon-neutrality would have to be set for the building materials, implying a relaxation on energy-expensive imports. The company will also change its role, dropping its major part in the building process, a strategy that has led to increased costs, and concentrating on development, which will spread some of the risk among third parties. The end result hoped for – at least in the short term – is a smaller, more sustainable development with less emphasis on futuristic technology but a better chance of meeting the needs of the market.