The Risk Informed Safety Margins Characterization (RISMC) Pathway is a systematic approach developed to characterize and quantify safety margins of nuclear power plant structures, systems and components. The model has been tested on the Advanced Test Reactor (ATR) at Idaho National Lab. By Curtis Smith and Diego Mandelli 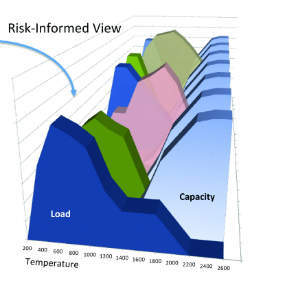 What differentiates the RISMC approach from traditional probabilistic risk assessment (PRA) is the concept of a safety margin. In PRA, a safety metric such as core damage frequency (CDF) is generally estimated using static fault-tree and event-tree models. However, it is not possible to estimate how close we are to physical safety limits (say peak clad temperature) for most accident sequences described in the PRA.

In the RISMC approach, what we want to understand is not just the frequency of an event like core damage, but how close we are (or not) to this event and how we might increase our safety margin through margin management strategies. In general terms, a margin is usually characterized in one of two ways:

The RISMC Pathway uses the probabilistic margin approach to quantify impacts to economics, reliability, and safety. Further, we use this approach in risk-informed margins management to present results to decision makers as it relates to margin recovery strategies. As an example of the type of results that are generated via the RISMC method and tools, we show a simple hypothetical example in Figure 1. For this example, we suppose that a NPP has two alternatives to consider:

Using the RISMC analysis methods and tools, we run 30 simulations where this component plays a role in plant response under accident conditions (note for ‘real’ cases many more simulations runs would be calculated). For each of the 30 simulations, we calculate the outcome of a selected safety metric — say peak-clad temperature — and compare that against a capacity limit (assumed to be 2200°F in this example). Simulations would have to be run for both alternative cases, resulting in a total of 60 simulations.

The results of these simulations are then used to determine the probabilistic margin (note lower values are better):

In this example, the load is the blue and red boxes shown in Figure 1 (measured by the peak clad temperature for each simulated scenario) and the capacity is the 2200°F clad-temperature limit as in 10 CFR 50.46.

If the safety margin characterization were the only decision factor, then Alternative #2 would be preferred (its safety characteristics are better) since only one case exceeded our 2200°F safety limit. Note though, that the safety margin insights are only part of the decision information that would be available to the decision maker: for example, the costs and schedules related to the alternatives would also need to be considered. In many cases, multiple alternatives would be available to the decision maker due to the level of redundancy and several barriers for safety present in current NPPs.

Because one objective of the LWRS program (see also box) is to develop technologies that can improve the reliability, sustain safety and extend the life of the current reactors,?any safety margin focus would need to consider more realistic load and capacity implications for operating NPPs. For example, the notional diagram shown in Figure 2 illustrates that safety, as represented by a load distribution, is a complex function that varies from one type of accident scenario to the next. However, the capacity part of the evaluation may not vary as much from one accident to the next because the safety capacity is determined by physical design elements such as fuel and material properties (which are common across a spectrum of accidents) or regulatory safety limits.

The determination of a quantitative safety margin requires an understanding of risk-based scenarios. Within a scenario, an understanding of plant behaviour (that is, operational rules such as technical specifications, operator behaviour, status of structures, systems and components) and associated uncertainty will be required to interface with a systems analysis code (for example, RELAP5). Then, to characterize safety margin for a specific safety performance metric of consideration (for example, peak clad temperature), the plant simulation will determine time and scenario-dependent outcomes for both the load and capacity. Specifically, the safety margin approach will use the physics-based plant results (the load) and contrast these to the capacity (for the associated performance metric) to determine if safety margins have been exceeded (or not) for a family of accident scenarios.

To better understand the approach to determine safety margins, we first introduce the two types of analysis used in this pathway, probabilistic and mechanistic quantification. Note that in actual applications, a blended approach is used where both types of analysis are used to support any one particular decision. For example, the approach could be either mostly probabilistic, mostly mechanistic, or both.

In Figure 3, the ‘plant deck’ arrows relate to the set of input file(s) needed to run a single simulation. These files (typically in text format) contain all the necessary information to perform a risk analysis (that is both deterministic and stochastic information). Various models are used for the physics simulation. The scope of the controller (shown top left of Figure 3) is to control the evolution of the simulation and to provide necessary information (for instance, values of pressure inside a specific node, status of a failure model) to both the physics and risk part of the simulation.

The purpose of the RISMC ATR case study is to demonstrate the RISMC approach using realistic plant information, including both real PRA and T-H models (the ATR has a detailed PRA, but its T-H?calculations, performed with the RELAP5 series of systems analysis tools, hardly cover risk scenarios at all). As part of this case study, we evaluated emergency diesel generator (EDG) issues, since recently ATR has investigated how to change emergency backup power at the plant. Historically, ATR has had a continually-running EDG as a backup power supply because commercial power at the INL (then called the National Reactor Testing Station) was somewhat unreliable.

Margin Recovery Strategies under consideration include:

For the different strategies, we model the plant behaviour both probabilistically (that a EDG or commercial power might fail, for example) and mechanistically (the T-H behaviour under off-normal conditions). To perform this simulation, we need to use the existing PRA and T-H information (for example, RELAP5 input, and probabilities from the INL-developed SAPHIRE software used to edit and solve the probabilistic model). We then define the simulation for different scenarios and different strategies, and then run a large number of iterations to determine overall safety margins.

The mechanics to conduct margins analysis for the ATR case study followed the RISMC-specific process steps, as shown in Table 1. After evaluating the proposed margin management strategies, the results indicate which of the associated safety margins are most preferential (Figure 4a). In this figure, we see that Case III would be preferred over the other two strategies when using safety as the sole decision factor.

Once we have an integrated risk-informed safety margin model with both probabilistic and mechanistic aspects, we have the ability to vary factors (such as core power) in order to see if our decisions change.

For example, we illustrate a hypothetical case in Figure 4b, where we see that the preferred margin management strategy might change depending on specifics of the plant. In this example, we see that if we increase the ATR core power to its maximum (250 MW) then it is possible that Case III is preferred over Case II, depending on the reliability of commercial power. Further, if it becomes known that the reliability of commercial offsite power is somewhat unreliable (availability of less than 0.8) then the Case I strategy may be preferential, depending on the ATR core power level.

Note that Figure 4b shows crisp boundaries between the three different cases. In many applications these boundaries may be no longer crisp but fuzzy. Such fuzziness would include for example uncertainties associated to the decision process.

The RISMC Pathway provides a systematic approach to the characterization of safety margins, leading to the support of margins management options (those proposed alternatives that work to control margin changes due to ageing or plant modifications). As such, it provides a vital input to the owner and regulator to support decision making for NPP operations now and for extended lifetimes.