A Rankine cycle made for two

The E.On–Energetix partnership to trial lightweight micro-CHP systems based on the organic Rankine cycle is one of several such marriages that have taken place in western Europe recently. 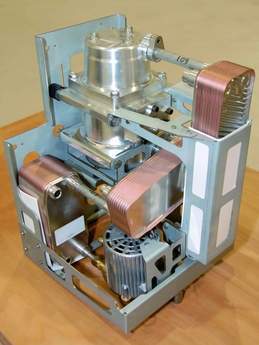 A recent Carbon Trust study assessing over 80 different micro-CHP installations found that carbon emissions were typically cut by between 15 and 20% in the case of commercial properties and between 5 and 10 % in larger types of homes. (Manufacturers themselves have made claims as high as 50%.) There is some hope that the domestic figure, rather low because of the unfavourable heat-led pattern of use, can be raised by the deployment of improved-efficiency units, and it is this prospect, together with the demonstrable electricity savings that can be offered, that has prompted several large energy companies to buy their way into the business by forming joint ventures with smaller companies, signing deals designed to accelerate widespread adoption of carbon-saving technology.

The Energetix agreement with E.On is part of this flurry of activity. Under the agreement E.On will fund the testing and evaluation of a Genlec microCHP system, which the company hopes could emerge as the first lightweight wall-mounted CHP generator.

The two companies will then collaborate on the development and deployment of a fully-integrated microCHP system, incorporating Energetix’s Genlec organic Rankine cycle unit, a product compact and lightweight enough to be wall-mounted, where it can be a straight plug-in for a standard gas boiler. They would fit commercially into the 20 000 kWh/y slot, which covers 80% of UK boiler installations. Energetix believes that as well as reducing carbon emissions the CHP unit, which at full output reaches 95% thermal efficiency, would reduce user energy bills by around £150 pa, giving a payback of 3-5 years based on an eventual price to consumers of £2750 for their unit compared to £2000 for a conventional boiler.

Charles Bradshaw-Smith, head of innovation at E.On, said: ‘We certainly believe that Energetix’s system has the potential to make a difference, which is why we’re co-operating with them on development and eventual roll out.’ E.On’s part initially is to fund an evaluation of the Genlec branded unit in a test house (a purpose built dwelling corresponding to the UK average) at the Energetix facility in Capenhurst Technology Park, with verification by independent experts EA Technology. The trial, which is scheduled for completion during the first half of this year, will outline the energy savings achieved during testing of the system, assess its commercial value and appraise its economic potential.

If successful it will also become highly eligible as a supplier to the Dutch government when it rolls out its forthcoming programme to install 10 000 microCHP units in households in a mass trial of the technology, using the four major national utilities as its agents. The process of selecting the CHP manufacturers and suppliers is still going on.

Energetix Group is not a manufacturer, but describes itself is a developer of new and sustainable alternative energy products. It operates by identifying key market demands for efficient, reliable and cost-effective energy provision and by developing a range of core technologies that address these market needs. Its aims for 2008 are mainly to achieve the product launch, with sales though the organisation of its boiler partner, confirm it position as a part of E.On’s micro-generation portfolio and select an assembly partner.

The organic Rankine cycle is broadly similar to a domestic refrigeration cycle. A Genlec unit consists of an ORC module, a heating circuit and a conversion and control interface.

The ORC consist of a circulating organic fluid of high molecular mass which is pumped around the circuit and is indirectly heated by the boiler to produce a vapour which is used to rotate a scroll expander. The expander shaft output runs the generator. The organic vapour then passes through a condenser/heat exchanger that transfers the fluid’s heat content to the central heating circuit. The condensed fluid is returned to the boiler for heating. In current designs generated power is phase-matched then fed directly into the household supply, with surplus electricity being simply ‘spilled’ to the grid.

All major components in the Genlec module are mass manufactured, to reduce costs and increase reliability. The first generation unit has been operating now for over a year in the test house, while a lighter second generation model has been in operation since January this year. Genlec has two product platforms already signed, with Daalderop and an as yet unnamed boilermaker, with two more in the pipeline.

The Baxi Group, in partnership with Microgen Energy, the Stirling engine-CHP technology company, is attempting to pioneer the production and distribution of a cogeneration product design utilising Stirling engine combustion and controls technology, and intends to bring a 1.1 kWe, 18 kWt microCHP appliance, designated Ecogen, to the UK residential market by 2009.

Baxi tested its Home Energy Centre, a fuel cell (polymer electrolyte membrane) powered micro-CHP unit in a specially built private house in Eyemouth, Berwickshire, in November 2005. It was the UK’s first such installation. The test, monitored by the Carbon Trust ran for a year, during which the unit was to supply all the heat and 70% of the electricity load. Scottish company iGen was the integrated system developer. Fuel cells were provided by Baxi’s subsidiary in Germany, european fuel cells GmbH, acquired a few years ago with exactly this kind of development in mind.

In January this year British Gas parent company Centrica announced that it was to acquire a £20m, 10 % stake in fuel cell CHP specialist Ceres Power, will invest an extra £5m to fund a commercial launch of the Ceres CHP generator, and will buy at least 37 500 of the units over four years.

This is the result of a 2005 deal between British Gas and Ceres Power to commercially develop domestic CHP boilers powered by its metal-supported solid oxide fuel cells. A cube of cells, each about 100 cm2 but wafer-thin, forms the heart of the unit.

It was in January that E.On signed the deal with Energetix Group to trial microCHP units in UK homes that is described above. Charles Bradshaw-Smith, head of innovation at E.On, said the system was one of a number of micro-generation technologies that the energy giant is investigating that could deliver significant energy and carbon savings to domestic customers. The deal followed hot on the heels of E.On’s announcement of an alliance with EC Power that will see the energy supplier offer EC Power’s gas engine powered CHP generators to business and public sector customers.

Internal components of the Genlec micro-CHP unit, based on the organic Rankine cycle (ORC)

Scottish and Southern Energy (SSE), which earlier this year bought wind farm operator Airtricity, has become the latest energy major to take a serious interest in CHP technologies, with the announcement that it has formed a 50:50 joint venture with fuel cell specialist Intelligent Energy, to be called IE CHP Ltd, that will focus on developing a fuel cell-based CHP system for the light industrial, commercial and residential markets in the British Isles. SSE is to invest £1m in the company and has guaranteed a series of further phased investments once it meets certain undisclosed milestones.

Then in April it acquired a 21 % stake in fuel cell technology specialist Logan Energy. SSE paid £375 000 plus goodwill brought to the business for its stake as part of a deal that has also seen the Scottish government’s investment arm, Scottish Enterprise, pay the same sum for a 15 % corporate co-venturing stake. Logan is the UK subsidiary of US-based fuel cell developer Logan Energy Inc and specialises in fuel cell-based CHP systems for residential and industrial sites. Logan is currently at various stages of discussion over 20 potential fuel cell CHP installations, and has won the contract to supply a 200 kW fuel cell into the Transport for London offices.

The fuel cells will be integrated into domestic microCHP units and sold through the boiler trade.