A Canadian icon gets a new lease of life

SNC-Lavalin has won a series of contracts, worth $73 million in total, to carry out reactor component design and replacement, and related O&M work, at the iconic eight-unit Bruce Power CANDU NPP in Ontario. 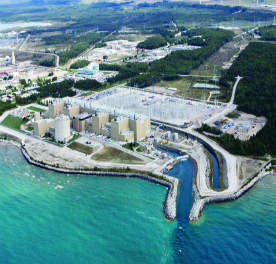 In August engineering group SNC-Lavalin announced that between February and June this year it had been awarded $45 million worth of contracts to carry out work on the Bruce Power CANDU reactor ‘in support of its operational objectives’.

The contracts awarded were won under a Master Service Agreement signed by the two companies in 2016. “Bruce Power has expressed confidence in SNC-Lavalin by continuing our long-standing partnership,” said Preston Swafford, chief nuclear officer and executive vp, nuclear, for SNC-Lavalin. “As the original equipment manufacturer of Canadian CANDU technology, we are committed to our clients’ success.”

“Bruce Power has a long-standing relationship with SNC- Lavalin for critical work that is part of the life-extension project” commented Mike Rencheck, president and CEO, Bruce Power. “… this agreement will help us ensure the project continues to be a success, therefore realising Bruce Power’s commitment to continue delivering clean, reliable and low-cost nuclear power for families and business through to 2064.”

The work contracts described above are in addition to, and build on, $28 million of orders that SNC-Lavalin announced in February this year. These were awarded to support Bruce Power’s ‘Major Component Replacement project’ (MCR), also under the Master Services Agreement signed by the two companies a year ago.

Under two of four discrete contracts, SNC-Lavalin’s nuclear team, based in Mississauga, is performing what it calls ‘significant engineering scopes’ for detailed design of fuel channel and feeder reactor components. The design of these core components will enable the reactors, starting with Unit 6 and applicable to the remaining units, to continue to produce power for another 30 years.

The fourth contract covers preliminary design of visual inspection and vacuuming tools which will be used by Bruce Power to clean and inspect the internal structure of the calandria vessel, providing assurance all components are fit for use to continue generating power. Preston Swafford commented. “We are committed to successfully delivering this important component of Ontario’s Long-Term Energy Plan.”