A long-established emphasis on worker safety in the mining industry has helped it to deal with the worst of the Covid-19 pandemic, and allowed companies to deduce how to improve those processes even further 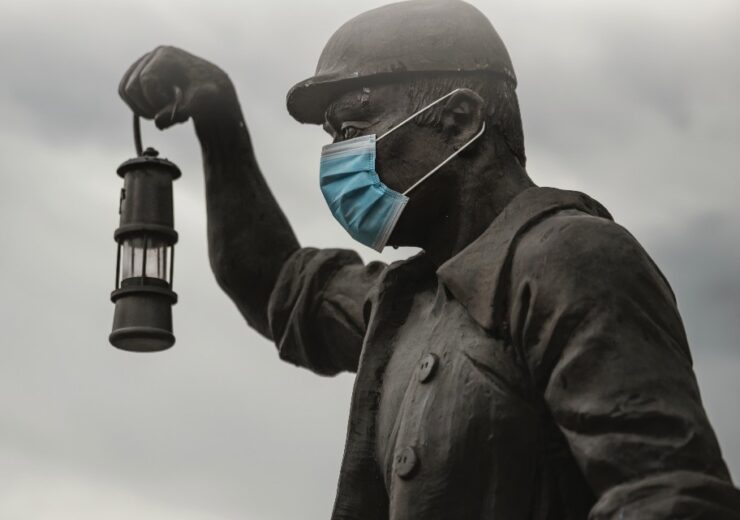 World Mining Frontiers writer Andrea Valentino talks with Ashley Burke, senior vice-president for communications at the US National Mining Association, and Andrew Swart, a mining specialist at Deloitte, about how experience with emergency planning has helped the industry prepare for Covid-19.

In 1918, as the First World War spluttered to an end, the world’s miners were as busy as ever. A visitor to the Union of South Africa, for example, would have found the badlands around Kimberley alive with the sounds of picks and explosions, as thousands of workers put in hour after hour to extract diamonds for the coffers of an exhausted British Empire.

Yet, over just a few weeks in October of that year, as the UK and France prepared for victory on the Western Front, the Kimberley mines would fall silent.

Reading back, the numbers are bewildering. After 1918, flu pandemic galloped into the region at the start of the month, Kimberley’s mines were ravaged. By 2 October, deaths had been reported at four facilities. By 18 October, more than 2,000 local mineworkers had perished.

A mark of how easily pandemics can spread in cramped, narrow mines? Certainly. But the nightmare in Kimberley is also instructive for another reason too. After realising the scale of the threat, bosses in South Africa’s gold sector allowed their staff to escape the coming disaster – sparing their staff the slaughter visited on their diamond-chasing counterparts in Kimberley.

Modern comparisons with that sepia-tinged age a century ago hardly need to be made. According to a not-for-profit MiningWatch coalition study in June 2020, 4,000 mine workers in 18 countries had tested positive for Covid-19, with some remote mining communities registering infection rates of nearly 3%.

Yet, if mining sites are natural incubators for viruses, that also means administrators have had plenty of planning time to prepare for the current emergency. Just like their forebears in South Africa, moreover, contemporary mining officials have a vast toolkit of tricks to bring cases down.

That’s especially true given the increasing influence of new technology. From automation to remote work, there’s little reason to doubt the industry’s ability to cope with the pandemic – even if the mining sector that emerges after everyone has been vaccinated looks different to what came before.

Whatever Wild West assumptions might spring to mind, most mining operations are tangled up with whole binders of regulation.

In the US, for example, government regulations strictly enforce how and when miners can and can’t work, dictating everything from emergency response plans (which have to be updated every six months) to how quickly a mine must inform the authorities of a fatality on-site (they only have 15 minutes).

All this is repeated to varying degrees in Canada, Australia and across the Atlantic. Apart from EU rules, for instance, Germany boasts no less than four separate mining codes.

To put it another way, says Ashley Burke, senior vice-president for communications at the US National Mining Association, “Safety is at the centre of a mine’s operations and is always top of mind.” More to the point, she adds, these flurries of regulations mean that mines the world over could adapt quickly when Covid-19 struck.

“Given the rigorous focus on safety that existed pre-pandemic, our industry was particularly well-positioned to respond and adjust once Covid hit.”

Not that faceless bureaucracy was the only thing pushing miners towards robust security. As Andrew Swart, a mining specialist at Deloitte with more than two decades of experience in the industry, explains it, the industry’s “high-risk” workplaces help too.

“We have a lot of mines that are already very deep, which means they’re either very dusty or risk creating a noxious environment,” explains Swart. “Given these conditions, the industry has embedded a safety culture within organisations.”

To understand what he means, consider the many dangers of a modern mine – even in a developed country, before the pandemic arrived. From toxic chemicals like sulphuric acid and cyanide to air pollution, high temperatures and landslides, one has to be tough to be a miner.

Though the figures are constantly improving, even a global company like Glencore suffered 16 on-site fatalities in 2019.

From the point of view of personal preservation, then, these hazards have forced the industry to craft what Swart calls a “culture of safety” around everything it does. To put it another way, the arrival of Covid-19 was “just another safety challenge they had to deal with”.

Examine how companies have reacted to the pandemic and it’s hard to disagree. At Rio Tinto, for example, executives announced a package of $25m to keep miners and their families secure from Covid-19 – to go with the millions it normally spends on health and safety. The story is much the same with other companies, from Glencore’s “SafeWork” initiative to Anglo American’s promise to battle towards “Zero Harm” for employees.

Not that the big conglomerates have quite been able to rest on their laurels. Among other things, remote working has increased dramatically, especially for white collar staff. Rather than going into the office, says Swart, workers in Melbourne or Montreal are being told to stay at home.

Emergency planning in the mining industry

Look at the recent production figures for mines, and one might be surprised. Though it’s true that upwards of $8bn of revenue was deemed at risk because of the pandemic, dig a little deeper and the situation gets rosier. Copper production is a case in point. Rio Tinto, for instance, only downgraded its estimated production figures for the metal from 1,300 tonnes to 1,250 tonnes.

Based in Toronto, Lundin Mining was similarly upbeat, reducing its copper estimates by just 6,000 tonnes, still leaving it with a healthy 278,500 tonnes by the end of the year. In short, then, whatever the panic of February and March 2020, mining seems to have bounced back pretty well.

Of course, the corollary of all this is that the majority of mines in the majority of places must have stayed open throughout the pandemic, especially in countries like Australia, where officials deemed mining an essential industry.

And that, in turn, begs a further question: whatever emergency planning and safety procedures mining operators may have had before, what are they doing that’s new?

To take the obvious things first, Burke explains, US operators are following Centres for Disease Control (CDC) guidelines, forcing staff to take temperature checks and answer health quizzes about symptoms. Testing for Covid-19 has been ramped up too, with Barrick buying 800,000 antibody kits for miners.

Another easy fix is promoting social distancing, Burke adds, limiting the number of miners allowed in lifts or marking spots where they should sit on lorries.

Beyond that, though, recent upheavals have forced corporations to reflect on their operations in more fundamental ways. Staffing is one example. Accountants or IT specialists in urban centres may be able to log in from home, but what about colleagues who get their hands dirty at the literal coalface?

Rather than flying in and out from remote mines regularly, increasing the risks of infection, Swart explains that miners in the Yukon and other wildernesses have begun staying in the field for longer.

The question of supplies is important in another way. With lockdowns and travel bans all the rage, supply chains are increasingly being stretched.

The solution is to go local, says Swart – a choice with a potentially long-term impact on logistical strategies. “Does that cause mining companies to look at supply chain options that are more regional to ensure the ongoing availability of spares and pieces of equipment?”

Burke agrees, suggesting that for major powers like the US, a rethink isn’t just good for business – it’s crucial for national security. “Our nation’s manufacturing, medical, defence and technology supply chains all rely on massive amounts of mined goods,” she says, “and over the years we’ve become far too dependent on imports for materials we could be sourcing at home.”

The dawn of mining automation

How, then, might the pandemic transform mining in the future? Though she’s reluctant to make too many predictions, Burke believes that automation, already in full swing, will only increase: “Mine operators, equipment manufacturers and miners continue, as they have for decades, to develop machinery and devices to make miners’ jobs safer and healthier, including the use of automation. We don’t anticipate any change.”

Swart is rather more vehement on this point, claiming that automation in all its forms will “absolutely” be accelerated by the pandemic. That certainly makes sense. If trucks can drive themselves, and drills can be operated from an office miles away, why jeopardise the health of workers in cramped lifts and narrow mine shafts?

More broadly, Swart wonders if the staffing principles of the past few months might not be taken to their logical conclusions. Rather than importing miners from distant towns – even if they stay put for a while – he thinks that companies may start hiring more locals.

Whatever the human and economic misery of Covid-19 right now, the pandemic might ultimately herald a more equitable mining industry in the years to come.